TORONTO -- Walking in downtown Toronto on Thursday morning you may spot girls appearing to model day-to-day clothing behind a storefront window, but in reality they are drawing attention to the harsh truths of sex trafficking in our city, province and country.

“To sex traffickers, girls are just products,” a bold sign placed in between the girls reads.

“Unsuspecting girls are being lured into the sex industry and forced to sell their bodies for someone else’s profit. It’s called sex trafficking, and it’s happening here at home.”

“The Ellie,” “The Amara,” “The Samantha,” “The Maya,” and "The Michaela" stand behind glass on a busy stretch of Queen Street West, just west of University Avenue, for several hours wearing bright-coloured clothing as passersby catch an unwary glimpse. 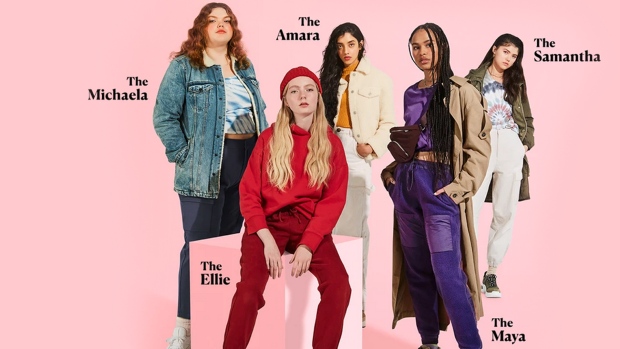 This eye-drawing spectacle called “Shoppable Girls" is part of a campaign launched by Covenant House Toronto on Tuesday, in partnership with the Toronto Police Service’s Human Trafficking Unit.

“It is really important to recognize that 93 per cent of (domestic) sex trafficking victims are Canadian citizens,” she said while standing outside of the storefront. “This is something that is happening in Canada, in Toronto and in our province.”

“We need to continue this conversation, we need to continue to build awareness that this issue is happening, to create a dialogue and vocabulary with parents, caregivers and young people so that they can actually understand what sex trafficking is.”

A member of the Toronto Police Service’s Human Trafficking Unit was also at the Queen Street West location on Thursday morning, noting that it is important for officers to partner with stakeholders “for these types of investigations.”

Det.-Sgt. David Correa spoke about the police service’s role as a “strong player in the enforcement and advocacy for victims of crime associated with human trafficking.”

Correa said this campaign is part of an important movement that educates Torontonians and brings awareness to this ongoing problem.

“It is really getting it out there to the public,” he said.

Correa, as well as Neubauer, also touched on vital resources that can provide assistance to those affected by sex trafficking, including hot lines and websites.

These resources aim to provide additional information on this “misunderstood issue,” Neubauer said.

“Being able to identify the signs of luring, grooming and exploitation is vital to helping to prevent sex trafficking,” she said. “The more girls and their parents or caregivers know about sex trafficking, the better equipped they are to protect themselves.”

Covenant House launched its anti-trafficking plan in 2016 and says, so far, it has provided support to more than 200 survivors.

Issue is ‘lurking beneath the surface,’ mayor says

Last year, the City of Toronto said concern regarding human trafficking in Canada had grown over the last decade.

On June 18, 2019, city council adopted a report that outlines a number of actions officials proposed to take in collaboration with “other agencies, corporations and divisions to support survivors of human trafficking.”

At the time, the city referenced human trafficking statistics provided by the Toronto Police Service.

Outside the storefront on Thursday afternoon, Toronto Mayor John Tory said the “unusual display” addresses an issue that is “lurking beneath the surface.”

He said it’s important for people to watch for signs of human trafficking occurring across the city, especially in hotels.

“Hotels are unfortunately a base of activity where mainly young women, very young women, I mean the age can go down as low as 13, and I think the average age is around 17,” he said. “They can virtually be held captive in these hotels and forced to take part in the sex trade.”

“We can educate the public so they can become the eyes and ears, much more so than the police can do and the Covenant Houses of the world can do, to try to put a stop to this and make sure that it is behaviour that they can report at the very least if they see it happening.”

Tory said this campaign, and others like it, come as “people are now willing to talk about these things.”

“And I think they are anxious to talk about these things, especially young people to each other, so that they can support each other.”

Joined @CovenantHouseTO this morning to launch the Shoppable Girls campaign to raise awareness and start a dialogue about sex trafficking ahead of #HumanTraffickingAwarenessDay on February 22nd. pic.twitter.com/irdZp6lzvZ

Dunlop echoed the sentiment that sex trafficking is an “underreported crime” across the province and country, adding that it is extremely important to raise awareness, especially among youth.

“We know that a girl can be valued at almost $300,000 and awareness like this is key to raising awareness in our communities about human trafficking because I think a lot of people don’t realize it’s happening right here in Ontario, in our own communities.”

Jones said the girls standing behind the glass on a busy street in downtown Toronto “puts the issue in your face.” 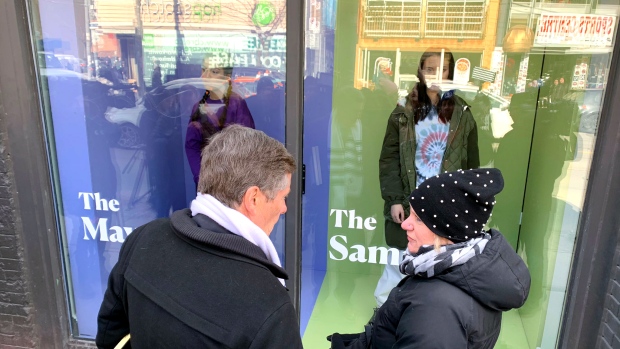 While awareness is vital, Jones said dealing with the issue as a whole goes beyond just that.

“We (the government) understand that you can’t just raise awareness, you can’t just remove these young girls, primarily, from it. We have to have all the pieces in place to make sure that those services are available when they need it,” she said.

Furthermore, Jones spoke to training that has been implemented for staff at hotels and restaurants in Ontario to help watch for “warning signs,” but said the problem has since moved to other locations.

“The criminals, if nothing, are creative and they’ve taken it to the short-term rentals because they understand that more eyes are watching – there are a lot of pieces to this.”

She said the Ontario government will be bringing forward some legislative changes “in the coming weeks” that will provide additional tools to help combat this issue.