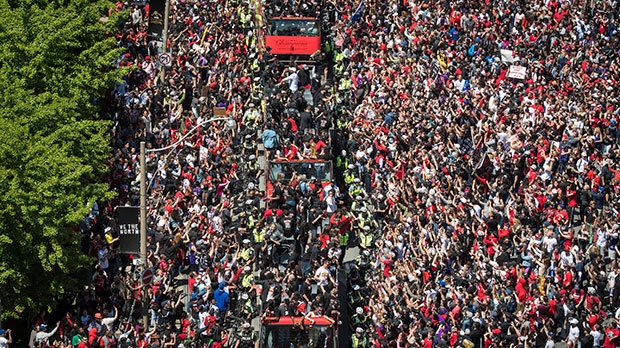 Fans flood the streets of Lake Shore Blvd. West to celebrate the Raptors during the Toronto Raptors NBA Championship Parade in Toronto on Monday, June 17, 2019. THE CANADIAN PRESS/Tijana Martin

TORONTO -- Lost children and dehydrated fans are some of the issues first responders say they are dealing with as a sea of fans awaits the arrival of the Raptors in downtown Toronto.

Fire district chief Stephan Powell says firefighters are dealing with about a dozen calls for dehydration in the packed Nathan Phillips Square outside city hall.

Powell says fans gathered to celebrate the new NBA champions should stay hydrated and leave the crowded areas if they are not feeling well.

Toronto police Const. Jenifferjit Sidhu says several children have been separated from their parents during the parade.

She says police will bring the children to 52 Division downtown to be reunited with their parents.

Sidhu says there are no reports of unruly fans or arrests.