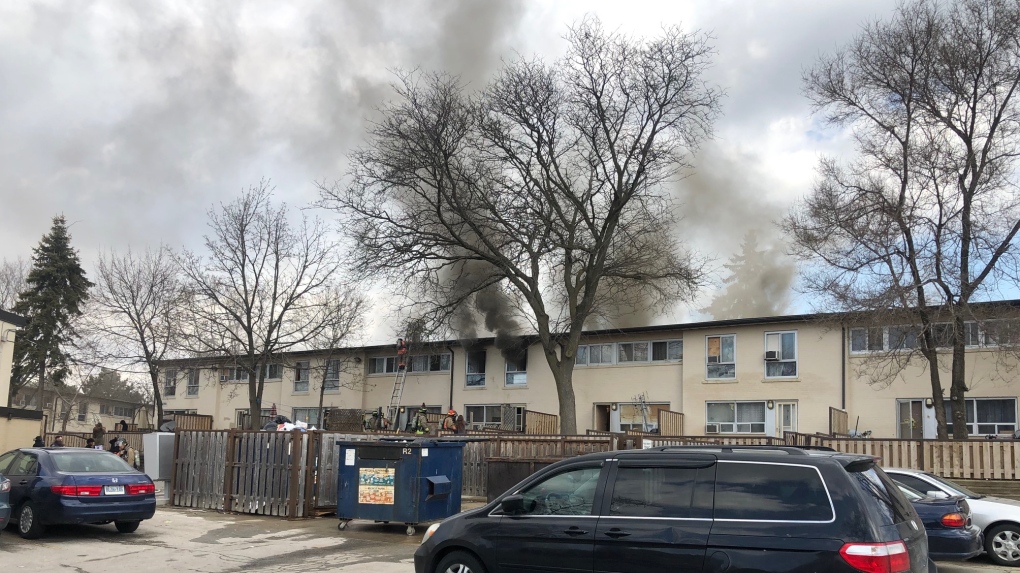 Black smoke drifts from the roof and windows of a Toronto Community Housing building in Etobicoke on March 19, 2019. (Peter Muscat/CTV News Toronto)

Toronto Fire Services says a two-alarm blaze at a Toronto Community Housing building in Etobicoke is now under control.

The fire broke out shortly before 1 p.m. at a building on 607 The East Mall, near Robinglade Drive and Rathburn Road. It was extinguished sometime before 2 p.m.

Reports from the scene suggest the fire started in a unit where plumbing work being done in a bathroom. It spread to the roof and across four units before being extinguished. Firefighters remain on scene investigating and making repairs.

“They had to open up walls and ceilings to check for extension of fire,” Platoon Chief Chris Bertram told CP24.

“There was some smoke migration throughout the rest of the building but that’s been cleared away.”

No serious injuries have been reported, however Bertram said three people were taken to hospital for minor smoke-related injuries.

“We believe that they will be fine,” he said.

Residents in adjacent units have been cleared from their homes. Bertram said some of those living in affected units will not be able to return tonight due to the damage.

“The ones that are affected, I believe we’re at five right now, and may be inhabitable for this evening,” he said.

“Toronto Housing is looking after accommodations for anyone who may end up being displaced by this fire.”

Roads have been closed in the area to accommodate the investigation.

It’s not known when the area will reopen or when crews will clear the building.

Video from the CTV News Toronto Chopper showed black smoke billowing from the roof of the building. A number of fire trucks remain at the scene.