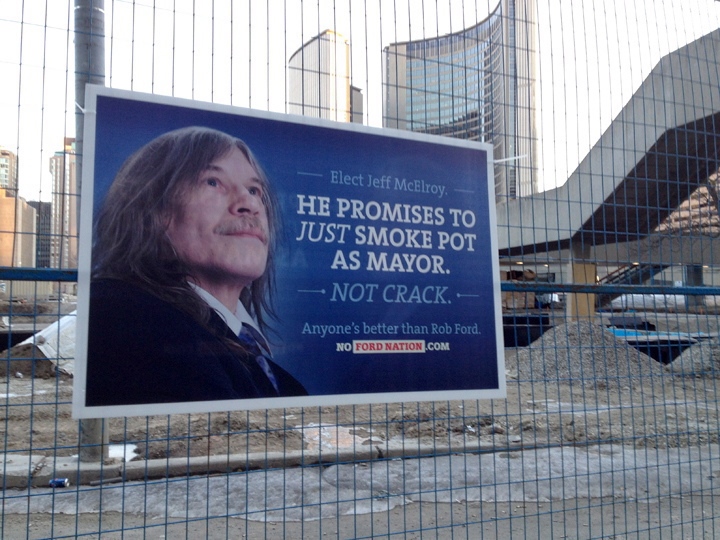 Eye-catching election signs for fake candidates appeared in Toronto on Monday, March 31, 2014. The signs, put up by No Ford Nation, a community group opposed to the re-election of Rob Ford, draws inspiration from the scandals besetting the mayor.

TORONTO -- A group opposed to the re-election of a scandal-plagued Mayor Rob Ford pressed its message Monday with a series of eye-catching road signs for fake candidates that use words like urinate and crack.

"When I urinate in public, I never get caught on camera," says one sign, which urges voters to get behind Jim Tomkins.

The signs were a collaborative effort between the community group No Ford Nation and Toronto advertising agency Rethink, which did the job for free.

"It was really a unique creative opportunity to do what we do best," said Caleb Goodman, partner and managing director at Rethink.

Over the past year, Ford has been embroiled in numerous scandals that have made him an international celebrity and a favourite of late-night TV comedy shows.

The mayor has admitted to smoking crack cocaine in a drunken stupor, has behaved boorishly in public, spouted profanities on live television and been caught ranting on video.

He is also the subject of an ongoing police investigation in which investigators photographed the mayor urinating in public.

Ford has said he is the best candidate to watch over taxpayer dollars and that his personal life doesn't interfere with his job.

Christina Robins, who founded No Ford Nation as a Facebook page in 2011, has set up the website www.nofordnation.com that aims to debunk Ford's various statements about his performance as mayor.

Robins calls her site a "one stop shop" for voters to get all the information they need to make an informed decision when they go to the polls.

"We're also trying to highlight the utter ridiculousness that we've had to deal with over the last four years from this mayor, and how we really don't want four more years of it," Robins said. "For the last four years, our city has just been a laughingstock."

While the No Ford Nation website draws attention to other candidates -- real ones -- vying to unseat the incumbent in the October election, none is likely to stump for votes in the way that fictional candidates Jeff McElroy or Ray Faranzi are doing.

Alluding to a video in which a drunken Ford angrily makes menacing moves and threats, Faranzi's sign notes:

Goodman said the signs simply borrowed from the Ford scandal reality that was the inspiration for several animated videos Rethink did for No Ford Nation.

"Where else do you have such rich material to create from than we did?" Goodman said. "They literally wrote themselves."

Not surprisingly, perhaps, several of the signs have already disappeared, either at the hands of collectors, or those opposed to their message.

Others have been clamouring for the signs.

"People wanted some for their own lawns," Goodman said.