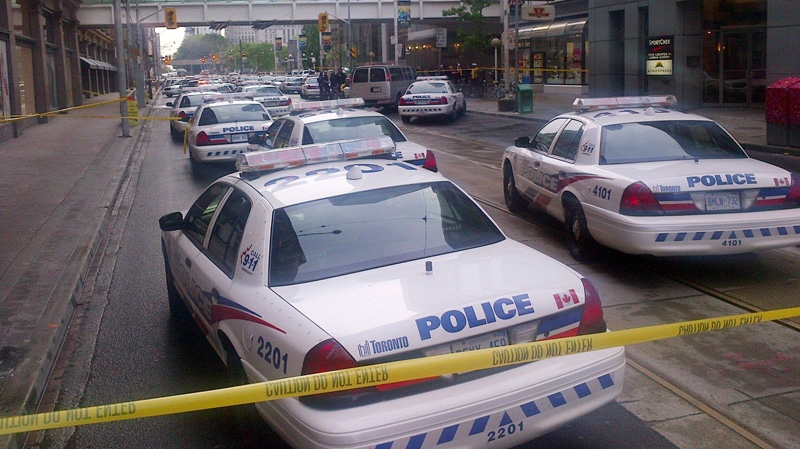 The suspect in the Toronto Eaton Centre shooting is expected to have his charges increased after another victim died from gunshot wounds this week.

The 22-year-old man, Nixon Nirmalendran, died in hospital Monday evening, according to police.

Sources told CTV Toronto that Nirmalendran had been on life support since last week.

His death came almost two weeks after he was one of seven people injured when gunfire erupted in the downtown Toronto shopping centre's food court on June 2.

The shooting also killed 24-year-old Ahmed Hassan, who is believed to have been the target of the attack.

CTV Toronto's Tamara Cherry reported on Tuesday that Nirmalendran had a long history with police.

On Oct. 31, 2007, Nirmalendran committed an armed robbery in Riverdale Park. The man he was with at the time was shot dead by police.

While spending time in the Don Jail in January 2010, Nirmalendran was charged with the jailhouse murder of Kevon Phillip. Those charges were ultimately withdrawn.

Police say the victim belonged to the same gang as Hassan and the suspected gunman.

However, Christopher Assie, a Toronto lawyer who represented Nirmalendran for several years, said he wasn't aware of his client's alleged ties to the downtown gang, Sick Thugz, and had not heard of Hassan, or the accused shooter, until the Eaton Centre shooting.

Nirmalendran leaves behind his girlfriend, parents and two younger brothers.

"I really liked Nixon," Assie said. "He was always very positive. He had a great sense of humour."

Assie last spoke to Nirmalendran earlier this year after the young man was released from the Don Jail.

At the time, Nirmalendran was one credit short of his high school diploma and had early acceptance to the Centennial College Children and Youth Program.

"He was looking forward to life and getting on with things," Assie said.

Christopher Husbands, 23, of Toronto, has been charged with first-degree murder and six counts of attempted murder in the attack.

Husbands is expected to return to court on Wednesday, where it is suspected police will drop one charge of attempted murder and seek an additional charge of first-degree murder.

He is also expected to be charged with one count of criminal negligence causing bodily harm in relation to a pregnant woman who was injured during a stampede following the shooting.

The Eaton Centre food court shooting came amid the Saturday evening dinner rush and caused massive panic among those shopping at the popular tourist destination.

The incident has reignited a debate over the safety of downtown Toronto, and led police officials and Mayor Rob Ford to assure the core is a safe place to live and visit.

Scores of people gathered for an anti-gun rally held in Yonge-Dundas Square on Monday evening, just outside the mall entrance.

Police are also asking anyone with images or video from the shooting to turn them over to police to aid in the investigation.