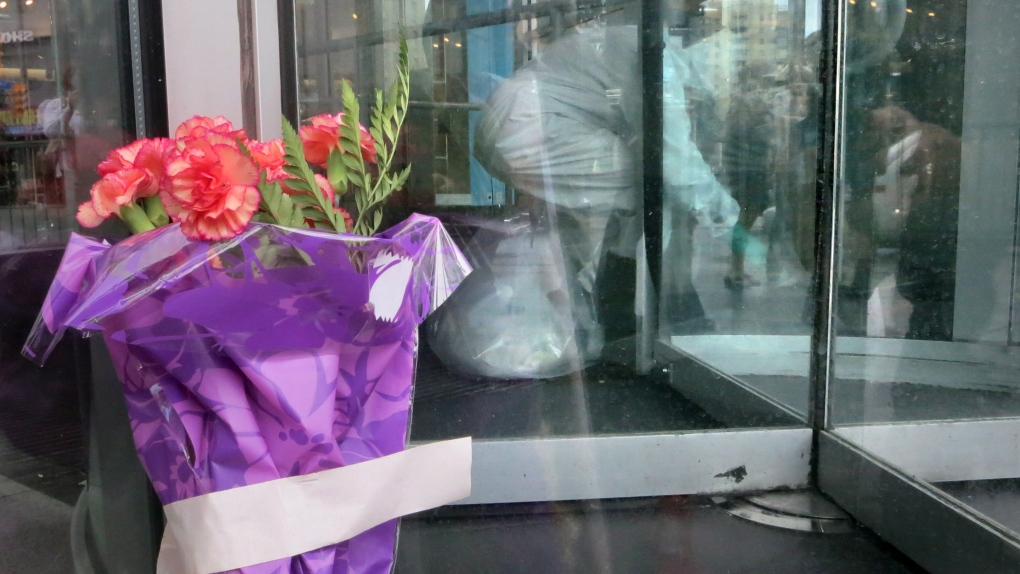 Flowers lie at the door as a member of a cleaning crew is pictured in the empty foyer of Toronto's Eaton Centre on Sunday, June 3, 2012. Police continue to investigate the Saturday's shooting which resulted in one death and seven injuries. (THE CANADIAN PRESS/Chris Young)

The 22-year-old man, who cannot be identified due to a court-ordered publication ban, died in hospital just after 7 p.m., police said.

His death came two weeks after he was one of seven people injured when gunfire erupted in the downtown Toronto shopping centre's food court on June 2.

Police say Hassan was the target of the attack and belonged to the same gang as the suspected gunman.

Sources told CTV Toronto's Tamara Cherry that the man who died Monday had been on life support since last week.

The man's death came the same day that a 13-year-old boy who was injured by gunfire in the shooting was released from the Hospital for Sick Children to continue his recovery at home.

Christopher Husbands, 23, of Toronto, has been charged with first-degree murder and six counts of attempted murder in the attack.

Also on Monday, people gathered for an anti-gun rally held in Yonge-Dundas Square, just outside the mall entrance.

One of those in attendance was Elaine Lumley, a mother whose only son was killed in 2005 in a shooting outside a nightclub in Montreal.

She told CP24 that gun violence is an ongoing problem, one that isn't going away.

"Even though the shooting at the Eaton Centre happened two weeks ago, guns are dangerous," she said. "And guns are flooding across the border, the handguns, and we have to do something about it."

The Toronto police investigation into the shooting is ongoing.

Police are looking into the connection between the shooting and a Toronto gang that calls itself Sic Thugs, to which Husbands has been linked.

Hassan, the first victim who died in the shooting, has also been linked to the same gang.

Police are also asking anyone with images or video from the shooting to turn them over to police to aid in the investigation.