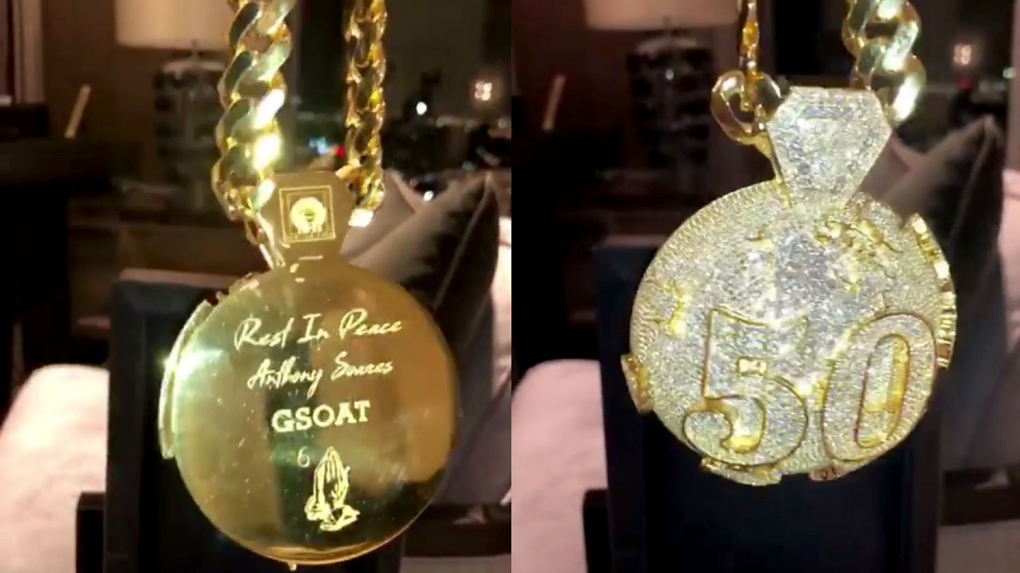 Two images taken from a video Drake posted on his Instagram account of a new chain made in honour of his late friend Anthony "Fif" Soares, who was shot dead in Scarborough back in September of 2017. (Instagram/Drake/@champagnepapi)

Drake has found a way to keep the memory of his late friend Anthony “Fif” Soares alive after the Scarborough native’s murder back in 2017.

Soares had just arrived at the lobby of a high-rise building on Glamorgan Avenue, near Kennedy and Ellesemere roads, on Sept. 14 when two suspects pulled up in a vehicle and “rushed him,” firing bullets through the glass windows.

Video surveillance taken from the building, provided by Toronto police, shows Soares drop to the floor while the windows shatter from the riddling of bullets.

The 33-year-old father was rushed to hospital and underwent emergency surgery but later died.

Soares – a known affiliate with Drake’s OVO crew – was mourned by the Toronto rapper online shortly after the news broke.

“RIP to one of our family members… our brother… I still can’t even believe this morning was real,” Drake wrote in the caption of an Instagram photo of Soares. “It was an honor [sic] to have shared years together and I will always keep your memory alive. Forever Fif.”

In a new Instagram post on Friday, Drake showed off a new chain covered in diamonds with the number 50 on the front and “Rest In Peace Anthorny Soares GSOAT’ on the back. Drake’s famed 6God logo is also carved at the bottom.

He tagged Seattle Gold jewelers in London, England in his post, as well.

Police have previously described Soares’ murder as “very targeted” and “overkill.” No arrests have been made in his death nor have police provided any further information on possible suspects.

Drake attended Soares funeral at Ogden Funeral Home in Scarborough where he was a pallbearer.