Two large-scale investigations in the Greater Toronto Area have led to the seizure of $45 million worth of illegal drugs, firearms, vehicles and cash and the arrest of 60 people.

Project Zen and Project Moon focused on illegal drug production and trafficking by organized crime groups operating in York Region and other parts of the Greater Toronto Area. 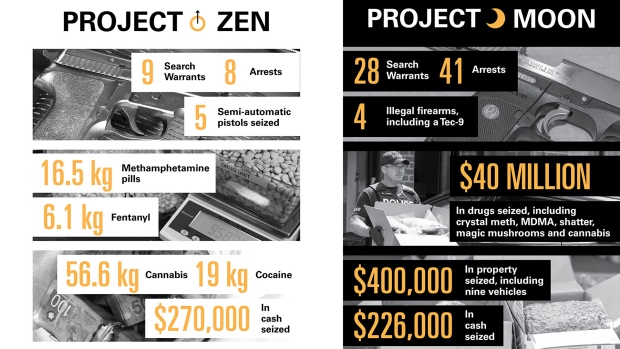 Details regarding Project Zen and Project Moon released by investigators are seen in these graphics. (York Regional Police)

“Increasingly we have seen that criminal groups are working together to further their criminal enterprises,” he said. “We have responded in kind, teaming up with our law enforcement partners to dismantle these criminal organizations.”

“Both investigations have illegal drugs and guns taken off the streets by dismantling the criminal organizations that manufacture and traffic them.” 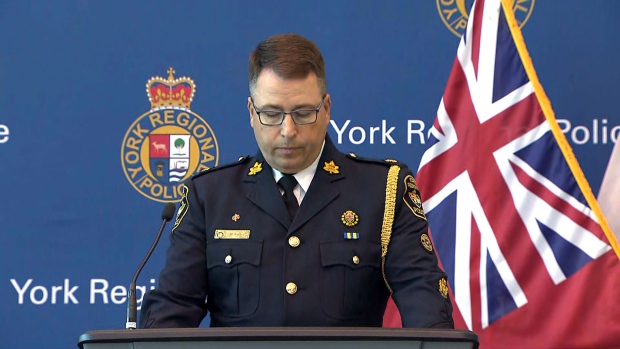 The first of the two probes, Project Zen, started at the beginning of this year when officers continued an investigation into an organized crime drug bust from 2018 in Kleinburg, Ont.

“Some of the members of the drug ring had previously been arrested and charged in 2018 when a suspect in front of a residence was arrested and found to be in possession of more than three kilograms of cocaine,” police said in a news release issued on Thursday, following the news conference.

“As the investigation progressed, it was discovered that those previously charged, along with additional suspects, were trafficking high volumes of synthetic drugs.” 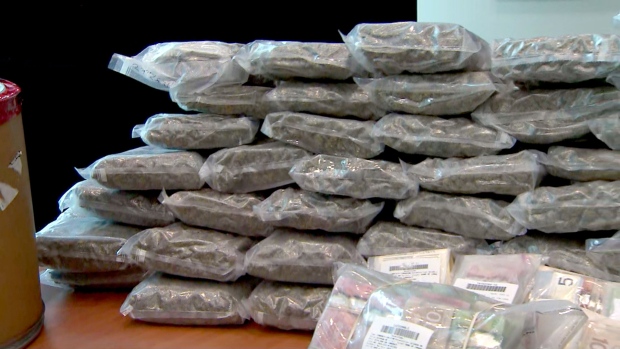 Nine search warrants were executed and eight arrests were made in the probe. 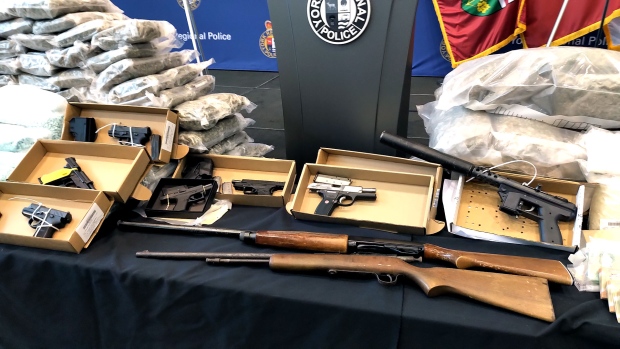 Firearms seized by officers are seen at a news conference held on August 8, 2019. (CTV News Toronto)

“This organization was trafficking large quantities of drugs, especially fentanyl,” Slack said, while noting this was the largest fentanyl seizure in the police service’s history.

“Fentanyl is a low-cost, but highly addictive synthetic opioid that is having a terrible impact on our communities,” he said. “When mixed with other synthetic drugs you cannot smell it, you cannot taste it and you cannot see it, but it has a terrible deadly effect.”

A total of 28 search warrants were conducted in the investigation, which led to the arrest of 41 people. Four illegal firearms, including a Tec-9, were seized along with $40 million in illegal drugs, $400,000 in property, including nine vehicles, and $226,000 in cash. 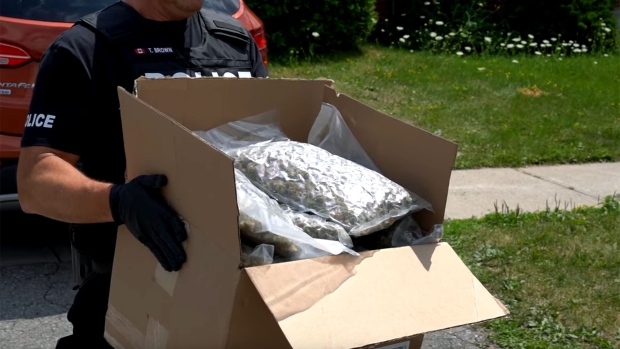 “These criminals were responsible for manufacturing and supplying our community with methamphetamine, MDMA, shatter and magic mushrooms,” Slack said.

The crime ring was funded through the “illicit cultivation and sale of cannabis,” according to police.

“Each day, hundreds of pounds of cannabis were being supplied to the illicit market – none of it was going to legitimate licence holders. Instead, it was financing synthetic drug trade here in York Region, which our investigators have successfully dismantled.”