TORONTO -- A 21-year-old man is dead after a targeted shooting in downtown Toronto that seriously injured two people and left others "running and screaming," police say.

Police said they were called to an "active and dynamic" scene at King Street West and Peter Street just after 4 p.m. Tuesday afternoon after receiving multiple calls reporting that several gunshots had been fired.

Police said it appears the shooting occurred outside a hotel in the area. Footage from the CTV News Toronto chopper showed evidence markers on the ground outside Bisha Hotel & Residences on Blue Jays Way.

Toronto police confirmed that a 21-year-old man died as a result of the shooting. A 15-year-old boy and a 27-year-old woman were also seriously injured, but they are expected to recover, according to police.

The relationship between the victims, if any, has not been released by police.

Toronto Police Chief Mark Saunders, who attended the scene hours after the shooting, called the incident brazen and said that authorities are searching for multiple suspects who fled in a blue vehicle.

"We're looking for a blue vehicle, and this is a suspect vehicle," Saunders said. "It turns out the suspect vehicle, based on the evidence we have right now was waiting for about 40 minutes for the occupants of another vehicle to arrive to their vehicle."

"When they did, the suspect vehicle made a U-turn came out and started firing at this group of individuals." 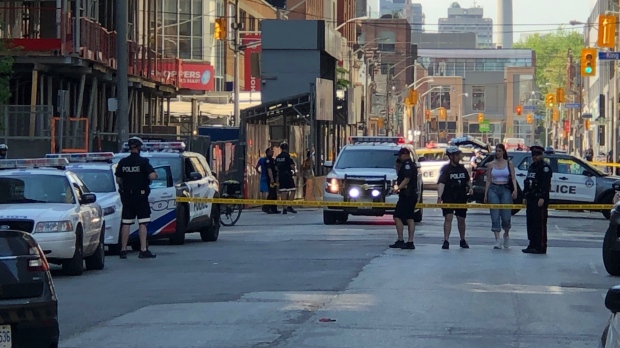 Saunders said the suspect vehicle drove south on Peter Street, then west on Front Street and then north on Spadina Avenue.

Saunders said they are reviewing security footage in the area and are asking anyone with information to come forward. He said it is early in the investigation but the case is "very solvable." He added that the victim's vehicle has not been located by police.

"The bottom line is there is a lot of evidence that we have gleaned so far,” Saunders said. “We know that we are getting more evidence, particularly by way of video."

Police say a firearm has been recovered by authorities.

Toronto Mayor John Tory commented on the shooting Tuesday night saying that the city needs to work to "eliminate gangs."

"It is just a tragedy, but is also something that makes very angry. A few people take a safe city and turn it into a situation like this," Tory said speaking to CP24.

Toronto Police Chief Mark Saunders had previously said that a 16-year-old boy had succumbed to his injuries. Police later clarified that the deceased victim was actually 21 years of age.