TORONTO -- Ontario Premier Doug Ford warns there will be a surge of COVID-19 cases, adding there are dark days ahead and there is very little separating the province from the devastation seen in Italy and Spain.

"We must not forget for one moment we’re facing a ruthless enemy," Ford said Wednesday while unveiling a $50 million fund to help businesses retool their operations to produce medical equipment and personal protective gear for front-line workers.

"A terrible virus is spreading around the world at an alarming rate … infecting people from all walks of life."

"The hard truth is, right now, today, there is very little separating what we will face here in Ontario from the devastation we’ve seen in Italy and Spain."

"Thousands of lives are at stake. The actions we take today, what we do as a government and as a people, will determine what we face tomorrow."

The government has based its recent self-distancing advice to Ontarians on provincial modelling, which has projected a "critical" situation over the next few weeks, with larger waves of patients ending up in hospitals and intensive care.

The province, however, has refused to share the data claiming that different models result in different outcomes which could lead to public panic.

"We're going to cause panic if we overestimate," Ford said. "The worst case scenario can get bad."

Canadian health officials have taken a different approach from their counterparts in the United States, who released dramatic predictions on the potential outcome of the pandemic. 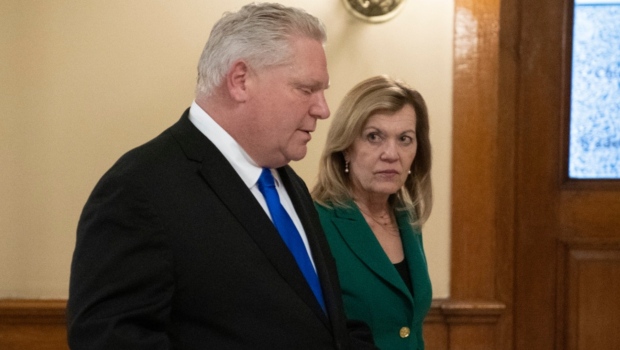 Once that happens, Elliott says, the government will be working with "current information" that will inform officials about whether the curve is being flattened.

Toronto city councilor Joe Cressy said municipal leaders base their decisions on provincial data and information they received this week convinced them that the city needed to act with "fierce urgency."

"If we collectively, in this government, don't take the strongest and strictest measures today, we will see an increase in deaths and the potential overwhelming in our health care sector," Cressy told CTV News Toronto.

Cressy said residents need to be "aware of the risks in front of them" if the city is expects them to self-isolate.

"We hope to have a report on some of the projections, perhaps by next week," Williams said during his daily briefing. "But, they keep changing and altering, depending on our data because in the modeling projections we're so early in the curve."

Ford calls on Ontario businesses to pitch in

Ford says the mass mobilization of government, businesses and people to slow the spread of COVID-19 is one of the most ambitious efforts undertaken by the province in generations.

The government says the Ontario Together Fund will go to the most viable, innovative proposals that can quickly provide medical supplies and equipment, including gowns, coveralls, face shields and ventilators.

The province has worked with the Automotive Parts Manufacturers' Association to get ventilators produced and Ontario recently ordered 10,000 of the machines from O-Two Medical Technologies.

"There is nothing we can't make here in Ontario," Ford said.

"We have an army, an army of 14.5 million people all across this great province. Hundreds of thousands of innovators who have the ability create the tools we need to fight the virus."