The protest follows the death of Enrico Miranda, 57, who was killed on Sept. 25 while on the job for Fiera Foods. Miranda was the fifth temporary agency worker to die on the job at Fiera Foods, and the second since Doug Ford took office, according to a news release issued Wednesday.

“Premier Doug Ford has left us with no other choice, but to start this occupation today,” Ontario Federation of Labour President Chris Buckley said in the news release.

The release states that temporary agency workers are twice as likely to get hurt on the job compared to hired employees.

“This is due to an ongoing loophole that shields companies from the cost of injuries suffered by the temp agency workers they hire,” the news release reads.

Protesters are asking for Ford’s signature on regulations that were drafted in 2018 to an existing piece of legislation that would prevent workplace deaths in the province.

Ford’s signature would mean that companies who use temporary workers would be financially responsible for workplace death and injuries under Workplace Safety and Insurance Board (WSIB).

“Had Ford implemented Section 83(4) of WSIA, companies like Fiera Foods would be held fully financially responsible for the injuries to temp agency workers,” Buckley said.

“This tragic death could have been prevented. It is time for companies like Fiera Foods to be held accountable.”

During the protest, Toronto police said that a number of people inside Ford's office were refusing to leave and were issued tickets.

In a statement to CTV News Toronto, a spokesperson for the Ford government commented on the development saying “Individuals have the right to exercise their constitutional freedom to demonstration but that right does not allow for the interference with the rights of other citizens."

"We will always engage in a respectful dialogue regarding contrasting policy views, however the actions demonstrated today are never justified.” 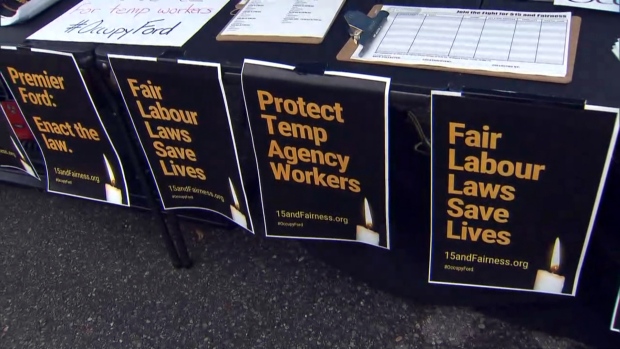