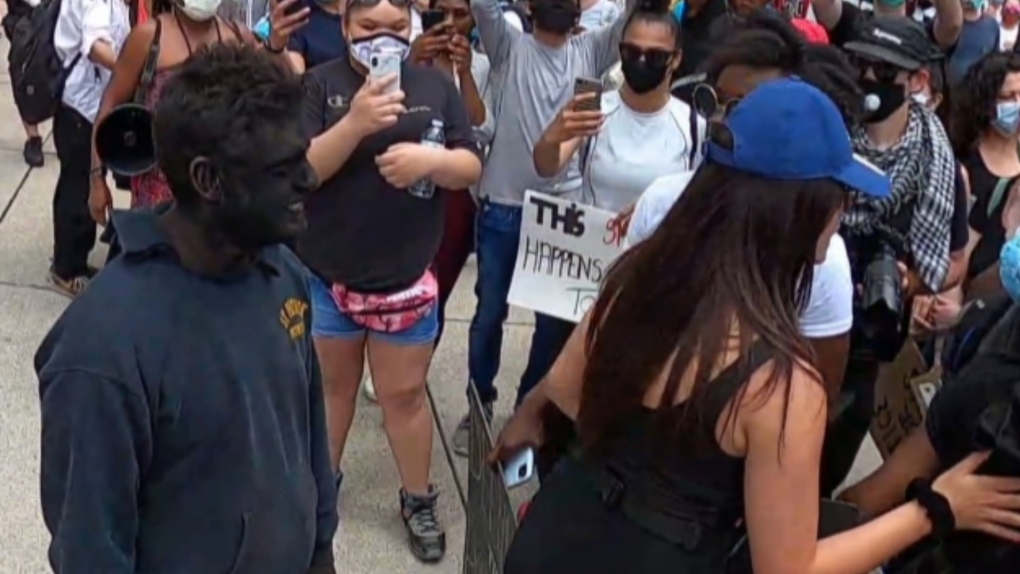 Toronto police say charges have now been laid after a man showed up to a peaceful anti-Black racism protest wearing blackface over the weekend.

TORONTO -- Toronto police say charges have now been laid after a man showed up to a peaceful anti-Black racism protest wearing blackface over the weekend.

Protesters gathered at Nathan Phillips Square on Saturday afternoon to participate in a rally calling for an end to anti-Black racism and during the event, a man showed up dressed in blackface.

Police say officers on scene spoke to the man and he was subsequently arrested for breaching the peace.

A suspect, who has now been identified by investigators as 28-year-old Deivis Shtembari, has been charged with causing a disturbance.

Protestors surround man in “black face” outside #Toronto city hall as he is led off by @TPSOperations @CTVToronto #protests #June6th pic.twitter.com/oOYZatBQ0g

He is scheduled to appear in court at Old City Hall on July 16.

Police are asking anyone with additional information about the incident to come forward.

Thousands of people gathered for two separate demonstrations in the city’s downtown core on Saturday to protest anti-Black racism.

Demonstrations have been held around the world following the death of George Floyd, who was killed in Minneapolis last week after a police officer placed his knee against Floyd's neck for eight minutes and 46 seconds, an incident that was caught on video.

“The last few days have been such a confirmation of sort of who we are and what we are as a city,” Tory said on Sunday.

“We know that anti-Black racism, and racism on a number of fronts, is still a significant issue here, as far as we've come…The message has been heard loud and clear.”