A timeline of the Toronto Raptors' road to the NBA Finals 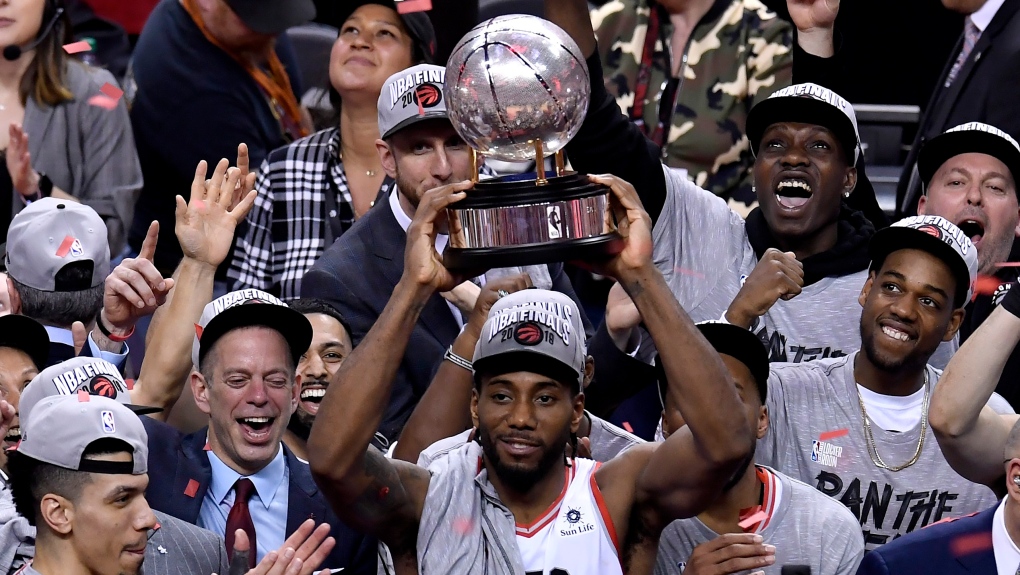 TORONTO -- The history of the Toronto Raptors certainly has its fair share of ups, downs and just plain strange moments.

Here's a look at the Raptors' winding road to the 2019 NBA Finals:

NOV. 4, 1993: The NBA awards Toronto its 28th franchise. John Bitove and Allan Slaight each have 44 per cent ownership of the team.

MAY 15, 1994: The team announces it will be called the Raptors. Many feel the name was influenced by the popularity of the movie "Jurassic Park."

MAY 24, 1994: NBA legend Isiah Thomas is introduced as vice-president of basketball and eventually gets part ownership of team.

JUNE 28, 1995: The Raptors make Damon Stoudamire their first draft pick, going seventh overall at the then-SkyDome. Fans boo the selection with many having hoped the Raptors would take Ed O'Bannon. Stoudamire goes on to win NBA rookie of the year honours.

NOV. 3, 1995: The Raptors beat the New Jersey Nets 94-79 in their first game in franchise history. A crowd of 33,306 at SkyDome watches Alvin Robertson score 30 points and Stoudamire record 10 points and 10 assists.

NOVEMBER 1996: Bitove sells his interest in the team to Slaight after the latter executes a shotgun clause.

FEBRUARY 1998: The Raptors trade a disgruntled Stoudamire to Portland in a multi-player deal.

FEBRUARY 1998: Maple Leaf Gardens Inc., owner of the Toronto Maple Leafs, buys the Raptors and the arena the team was building, the Air Canada Centre.

JUNE 1998: The Raptors make a draft-day deal to acquire Vince Carter, who was selected fifth overall by Golden State. He goes on to be named rookie of the year after a lockout-shortened season.

FEBRUARY 1999: The Air Canada Centre opens, giving the Raptors a true basketball arena after their run at the home of Major League Baseball's Blue Jays and the CFL's Argonauts.

JUNE 1999: The Raptors make a draft-day deal to acquire centre Antonio Davis from Indiana. The centre makes a significant impact, but things eventually go sour after he expressed concern about his kids learning the metric system and hearing the Canadian anthem at school in 2001.

FEBRUARY 2000: Carter wins the slam-dunk contest with a spectacular showing in Oakland.

APRIL 2000: The Raptors are swept by New York in their first playoff appearance. Head coach Butch Carter is fired after numerous controversies and replaced by veteran bench boss Lenny Wilkens.

SUMMER 2000: McGrady, a cousin of Vince Carter, elects to leave the Raptors, agreeing to a deal with Orlando. Carter, meanwhile, helps the Americans win gold at the Sydney Olympics, highlighted by a dunk in which he jumped over seven-foot-two French centre Frederic Weis.

APRIL 2001: Veteran Raptors forward Charles Oakley is suspended for one game without pay and fined $10,000 last month for hitting Tyrone Hill in the head with a basketball after a morning shootaround in Toronto before the 76ers played the Raptors. A story later comes out that Hill owed Oakley money from a dice game, starting a feud.

SPRING 2001: The Raptors win their first playoff series in franchise history, beating host New York in the fifth and final game. Toronto then loses in Game 7 in Philadelphia in the second-round when Carter's buzzer-beater for the win bounces off the rim. Earlier that day, he attended his college graduation ceremony at North Carolina.

JULY 2001: The Vancouver Grizzlies, who entered the league the same year as the Raptors, finalize a move to Memphis.

SUMMER 2001: The Raptors sign Alvin Williams, Jerome Williams and Davis to extensions, while adding legendary centre Hakeem Olajuwon, whose numbers go way down in what turned out to be his final season in the league.

SPRING 2002: The Raptors rally to clinch a playoff spot on the last day of the season with Carter out with one of numerous injuries that hampered him in his latter years with Toronto. The Raptors go on to lose in the fifth and final game of the first round against Detroit, with a key play coming when Chris Childs lost track of the score late and forced up an ill-advised shot.

SPRING 2003: Wilkens is fired after the Raptors finish 24-58 and replaced by Kevin O'Neill. The Raptors get the fourth pick in the draft and select Chris Bosh, an eventual 11-time NBA all-star.

SPRING 2004: The Raptors miss the playoffs again. Grunwald and O'Neill are both fired and eventually replaced by GM Rob Babcock and coach Sam Mitchell. A story earlier leaked out about O'Neill smashing and breaking a hotel lamp in Phoenix.

JUNE 2004: Babcock's first pick as GM is Rafael Araujo eighth overall. The Brazilian centre struggled badly and was out of the NBA in 2007. Babcock also signs point guard Rafer Alston to a long-term deal. After one rough game, a frustrated Alston says he's considering quitting the NBA. He turns out to have a short-lived stay in Toronto.

DECEMBER 2004: A disgruntled Carter is traded to New Jersey for Eric and Aaron Williams, Alonzo Mourning and two draft picks. The players make next to no impact for Toronto as the Raptors miss the playoffs.

DECEMBER 2004: Jalen Rose loses his spot in the starting lineup and dresses in all black to show his displeasure. "I thought I'd put on all black including black drawers because I knew something was up," Rose says.

FEBRUARY 2006: Babcock is fired and eventually replaced by 2004-05 executive of the year Bryan Colangelo of the Phoenix Suns.

SPRING 2007: After a rough start to the season and rumours about Mitchell's job security being in jeopardy, the Raptors turn things around and make the playoffs. Mitchell is coach of the year and Colangelo is executive of the year, but the Raptors lose in six games to Carter and New Jersey in the first round.

SUMMER 2008: After a first-round playoff exit against Orlando, the Raptors make a blockbuster deal to acquire all-star centre Jermaine O'Neal from Indiana. He lasts 41 games with Toronto before he is traded to Miami.

DECEMBER 2008: Mitchell is fired after an 8-9 start and replaced by Canadian assistant Jay Triano.

APRIL 2010: The Raptors miss the playoffs after a season-ending injury to Bosh coincides with a slide down the standings. That summer, he signs with Miami, joining fellow marquee free agents Dwyane Wade, who re-signed with the Heat, and LeBron James.

SUMMER 2011: After the Raptors miss the playoffs, Triano is replaced by Dwane Casey.

SUMMER 2012: The Raptors make a trade with Houston to acquire point guard Kyle Lowry. He eventually teams with DeRozan to give the Raptors their greatest team success until this year.

SEPTEMBER 2013: Toronto rapper Drake is named the team's global ambassador. The team's practice facility eventually gets Drake's OVO brand. The music star has raised controversy through the years for his antics at courtside.

MAY 2013: Colangelo is relieved of his duties as GM. He's eventually replaced by Denver GM Masai Ujiri, a former Raptors assistant.

SUMMER 2013: Ujiri finds a taker for Bargnani, shipping him to New York.

DECEMBER 2013: Ujiri finds a new home for high-priced forward Rudy Gay, dealing him to Sacramento in a multi-player deal that proves to be a turning point for the team. Ujiri was close to trading Lowry to the Knicks during this season, but New York eventually backed away from the deal.

SPRING 2014: The Raptors return to the playoffs for the first time since 2008, beginning their current run of six straight years in the post-season. The "We The North" campaign also is introduced. Ujiri makes headlines before Game 1 when he bellows "F--- Brooklyn" at the Jurassic Park fan zone. The Raptors lose in a very close Game 7 against visiting Brooklyn.

SPRING 2015: The Raptors are swept in the first round of the playoffs by Washington.

SPRING 2016: The Raptors win a pair of Game 7s against Indiana and Miami before falling to LeBron James and eventual champion Cleveland in Game 6 of the Eastern Conference final.

SPRING 2017: The Raptors are swept by Cleveland in the second round.

SPRING 2018: After finishing with the best record in the East in the regular season, the Raptors are swept by Cleveland again in the second round.

APRIL 2019: The Raptors finish second in the East after a controversial load management program for Leonard, limiting him to 60 games for the season.

MAY 12, 2019: Leonard's buzzer-beater hits the rim four times before going in, giving the Raptors a Game 7 win over visiting Philadelphia in the second round.

MAY 25, 2019: Leonard leads the Raptors back from a 15-point deficit as Toronto wins the Eastern Conference title for the first time with a Game 6 win over visiting Milwaukee. Leonard finishes with 27 points, 17 rebounds and seven assists as the Raptors book a spot in the NBA Finals against Golden State.