A timeline of the Patrick Brown resignation saga 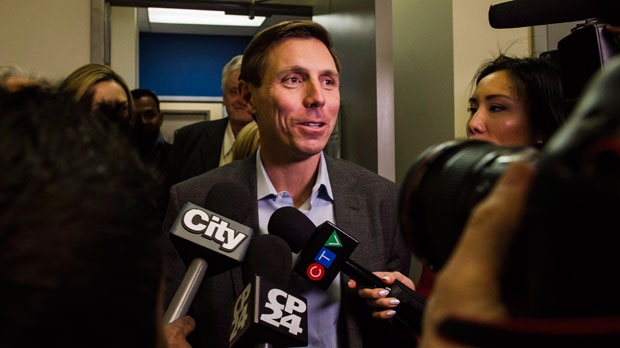 Patrick Brown speaks to media following a meeting at the Conservative Party headquarters in Toronto on Friday, February 16, 2018. THE CANADIAN PRESS/Christopher Katsarov

TORONTO - A timeline of the tumultuous events that followed the resignation of former Progressive Conservative leader Patrick Brown last month, and his bid to reclaim that post:

Jan. 24: Patrick Brown calls a last-minute news conference to deny a pending news report about sexual misconduct, and decry them as "categorically untrue." Minutes later, CTV News airs a story in which two unnamed women make allegations of sexual assault and other misconduct against Brown dating back to his time as a federal member of parliament. CTV said one woman, who is now 29, claimed she was still in high school and under the legal drinking age when Brown allegedly asked her to perform oral sex on him at his home after she'd been drinking. Another woman said she was a university student working in Brown's constituency office when he allegedly sexually assaulted her at his home, CTV reported. The allegations have not been independently verified by the Canadian Press.

Jan. 25: Brown issues a statement in the early morning hours saying he will step down as party leader to focus on clearing his name.

Jan. 26: The PC caucus names Tory legislator Victor Fedeli as interim leader. Fedeli vows to root out the "rot" from within the party. The caucus further recommends that Fedeli carry the party through to the election, but the party executive announce that a leadership contest will be held instead.

Jan. 29: Former Toronto city councillor Doug Ford, brother of the notorious late mayor Rob Ford, becomes the first person to declare his candidacy for the party leadership. He says he plans to rest control of the party from elites and give a voice to the grassroots members.

Feb. 1: Former Ontario legislator Christine Elliott announces her bid to contend for the party leadership. Elliott came second to Brown during the last contest to select a new leader in 2015. Elliott is the widow of late federal finance minister Jim Flaherty.

Feb. 6: Brown breaks his silence in a tweet reaffirming his denial of all sexual misconduct allegations and saying "the truth will come out."

Feb. 9: PostMedia publishes the first interview with Brown since his resignation, in which he says he's contemplating legal action for what he calls the "absolute lies" said about him.

Feb. 11: Brown publishes the first of several Facebook posts in which he vows to clear his name and questions the credibility of the women who brought allegations against him. He openly challenges the veracity of CTV's reporting on the original story and points out discrepancies in the women's accounts that he says prove their accusations are false.

Feb. 13: CTV reports one of Brown's accusers has altered the timeline of her story but stands by the core events of her allegation. The network says the woman, who claimed she was still in high school at the time of the incident, was in fact of legal age.

Feb. 15: Brown announces his intention to sue CTV for its reporting of the allegations against him.

Feb. 16: Interim Progressive Conservative leader Vic Fedeli says Brown has been kicked out of the caucus. With less than an hour to go before the deadline for candidates to register for the leadership expires, Brown joins the race. He says his name has been cleared and he wants to focus on getting Ontario back on track.