TORONTO -- An Ontario man said he was relieved to learn that his 89-year-old mother, who is living at a Markham, Ont. long-term care home in the midst of a COVID-19 outbreak, has recovered from the virus.

Margaret McCormick, who suffers from dementia and is living in Markhaven Home For Seniors, started to develop a mild fever and cough early last month. The family learned she had been placed in isolation due to suspected COVID-19 when they went to visit and were denied access.

More than a week later, they received a test confirming the result.

“It was devastating,” William McCormick told CTV News Toronto on Monday. “I thought the worst of course. She was sleeping an awful lot, lethargic …We couldn’t get her up some times. I would be banging on the window.”

As of Tuesday, there have been six COVID-19 related deaths at Markhaven Home for Seniors, a retirement home located near Parkway Avenue and Main Street. Several staff members have also tested positive for the virus.

Our community is coping with another sad loss. Our hearts are with the family and loved ones of an 85 year old woman who passed away recently. She was a resident of Markhaven Home for Seniors. This marks the 16th #COVID19 related death in York Region, the 6th death at the home.

William McCormick said that while his mother hasn’t been officially tested to prove that she doesn’t have COVID-19 anymore, she has been in isolation for about three weeks and hasn’t had a fever in more than one week.

“We are waiting for the final test but we are confident,” he said.

The family took video of Heather McCormick learning that she had beaten the virus and in it she can be seen smiling and holding her fists up to a window separating her from her children and grandchildren.

“The initial shock of it was terrible, when we finally got the news that she was positive, but she’s a fighter,” William said. “It’s pretty amazing. She is 89 years old, she will be 90 in August. She’s feisty.”

William McCormick said the situation has been particularly challenging for his mother, who doesn’t appear to understand the situation due to her dementia.

“All the people she actually knew got sick and they aren’t allowed to come back to work and now there are all these people … coming in, dressed in the gowns, masks, gloves, (it) scares her. She doesn’t know these people and they are poking at her and feeding her.”

“It’s so hard on the head because it’s not only going on there, it’s going on all around you,” he said. “We have a big family and this thing has really scared a lot of people.”

The family has been trying to visit Heather McCormick through her window multiple times a day, as they aren’t allowed to come into the building due to the outbreak. They even planted plastic flowers and put up a birdfeeder outside her window so that she and other residents have something colourful to look at while isolated in the retirement home. 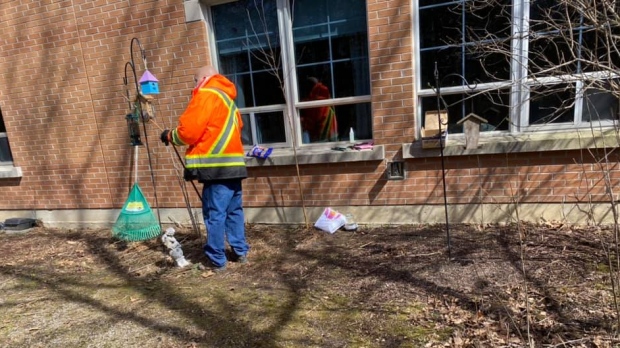 Numerous long-term care facilities across Ontario have reported outbreaks of COVID-19 over the last month. In Bobcaygeon, Ont., 26 residents have passed away as a result of the novel coronavirus. At least 24 staff members have also tested positive for the virus as of March 30.

At least eight have died at Seven Oaks Long Term Care Home in Scarborough and another four have died at the St. Clair O'Connor Community long-term care home in East York.