5 Toronto ridings to watch in the upcoming federal election 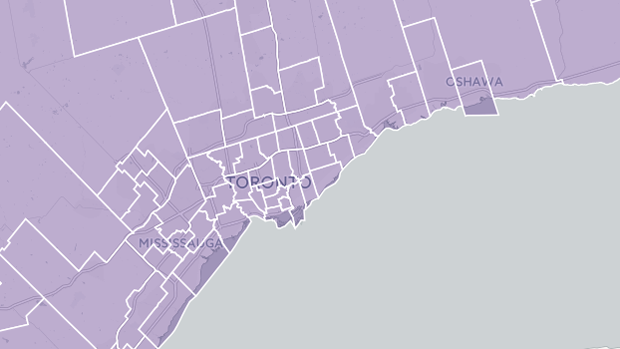 This map shows the ridings in the 2015 federal election in the GTA.

Canadians will head to the polls on Oct. 19 to vote for the next Prime Minister of Canada. But before that, there is a lot to learn about the candidates, ridings and redistribution of the federal electoral districts.

Canada’s map of the 338 ridings will look significantly different than it did in 2011, as the boundaries have been redrawn to reflect changes in Canada’s population.

Currently, the Liberals hold six ridings in Toronto, the Conservatives nine and the NDP have eight.

Here are five ridings in Toronto to watch as the election approaches:

Spadina-Fork York is one of Toronto’s new ridings in the October election. This riding became even more interesting when former MP and Toronto mayoral candidate Olivia Chow announced she was running for the NDP in the riding. Chow will face off against current Liberal MP and former Toronto city councillor Adam Vaughan. This riding spans a large portion of the downtown core, and includes the Toronto Island. The riding will include parts of the former electoral districts of Trinity-Spadina, held by Vaughan, and Toronto Centre, which is currently held by Liberal Chrystia Freeland. 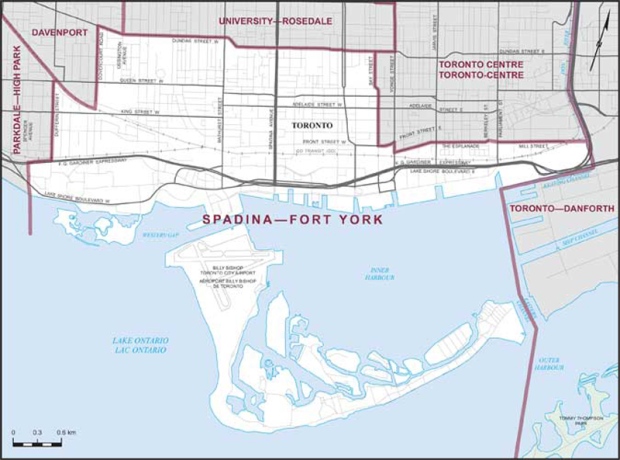 Scarborough Southwest is one of the six Scarborough ridings in the federal election. In June, former Toronto police chief Bill Blair was announced as the Liberal candidate for riding. Blair retired in early April after spending 10 years as Toronto’s top cop. Shortly after he retired, Blair announced he would be throwing his hat into the political race. He will face off against NDP incumbent Dan Harris. Harris became the MP for Scarborough Southwest in 2011 after years of Liberal control in the east-end riding.

University-Rosedale is a new riding that will encompass a portion of Toronto that is currently included in the districts of Trinity Spadina and Toronto Centre. The current Liberal MP for Toronto Centre, Chrystia Freeland, will be the Liberal candidate for the riding. Freeland became the Toronto Centre MP after a byelection in 2013 to replace retiring MP Bob Rae. Freeland will face off against NDP candidate Jennifer Hollett, Conservative candidate Karim Jivraj and Green Party candidate Nick Wright.

This riding spans the portion of Toronto northwest of the downtown core and is currently held by finance minister Joe Oliver. Before the 2011 election, this riding was dominated by the Liberal Party, dating back to the 1980s. Marco Mendicino, a Toronto lawyer, was selected at the end of July by the Liberal Party to try and defeat Oliver. Mendicino won the nomination over Eve Adams, a former Conservative MP who crossed the floor. The Liberals will look to retake the riding that they lost in 2011.

Don Valley North is on the list of new ridings that will be included in the October election. However, this riding isn’t totally new. It existed until 1996 when Ontario went through another round of riding redistribution. The riding covers a portion of North York and was created from parts of Don Valley East and Willowdale. The current Don Valley East MP, Joe Daniels, will change ridings to run for the Conservatives in Don Valley North.