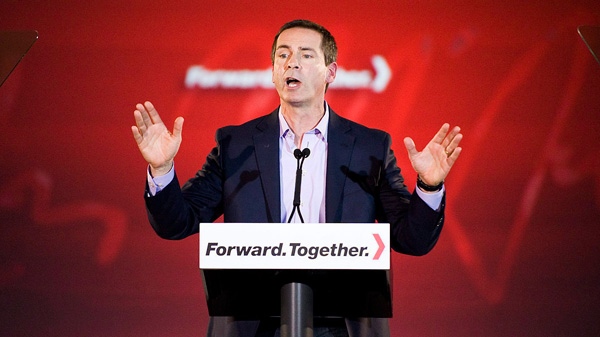 Dalton McGuinty speaks at a campaign rally in Brampton

TORONTO - It's been more than 100 years since the Liberals formed three consecutive majority governments in Ontario, and polls suggest Premier Dalton McGuinty could be hard pressed to accomplish the feat when voters cast their ballots on Thursday.

But the three-peat is hardly unprecedented in provincial or federal politics in Canada.

Ontario's Progressive Conservatives did it twice in modern times, with Leslie Frost leading them to three victories in the 1950s, followed by three more Tory majorities, but under two different premiers, John Robarts and Bill Davis.

McGuinty's road to a majority three-peat, however, is looking like more and more like an uphill battle.

Polls indicated Ontario's Liberals and Progressive Conservatives were in a dead heat heading into the final week of the campaign, with the New Democrats trailing but picking up support.

That has raised the prospect of a minority government in Ontario for the first time in 26 years.

McGuinty, however, has refused to acknowledge even the possibility of a minority scenario, insisting the Liberals will form a "strong, stable, majority government."

Going for a third term with the same leader is unusual, especially after the government took unpopular positions such as applying the harmonized sales tax to gasoline, electricity and home heating bills, all of which had been exempt from the provincial sales tax.

In McGuinty's case, there's no obvious successor waiting in the wings, as Paul Martin was throughout Chretien's time as prime minister.

"The caucus doesn't see a clear successor so that makes (the Liberals) loyal to him because he's the one that's going to keep them in power," said Henry Jacek, professor of political science at McMaster University in Hamilton. "Most of the Liberal caucus believes that Dalton is their ship and without him they sink."

During the campaign, McGuinty has brushed off questions about his future as party leader.

While most politicians would want to pull the plug after two terms, especially if the economy is struggling, McGuinty is just the opposite, said Matt Maychak, a former aide who worked closely with the Liberal leader for 10 years starting in the mid 1990s.

"Knowing him, we came out of this terrible recession that poses really serious structural challenges to the province, and you don't walk out on the family in tough times," said Maychak. "I sometimes wonder if the economy was booming and everything was great whether then he would have walked away, whereas most people would stay if everything was great and bailed if things looked tough."

Like any second-term government, the Liberals made decisions that upset some Ontarians -- such as hiking hydro bills -- which makes it harder to convince voters they deserve a third term, said Caroline Andrew, a political science professor at the University of Ottawa.

"I certainly think that in the last few years there's been a whole bunch of issues on which the government has been seen as unpopular," said Andrew. "And there's some system-wide things about governments of this particular time that often there have been cumulative irritations from the public."

Those "cumulative irritations" include the unpopular 13 per cent HST the Liberals introduced in 2010 and rising electricity bills, with the Progressive Conservatives and New Democrats both promising relief from soaring hydro rates.

There's no visceral public hatred of McGuinty as leader or premier, and therefore there was no reason for the party to throw him out before this election, said Andrew.

"There's been some unpopular issues with the government and things that were not dealt with in the way people would have liked, but there doesn't seem to have been a sense of blaming those directly on the leader," she said. "There's not a sense the party would do better with somebody else in."

While three majorities in a row seems like quite an accomplishment, it pales in comparison to Liberal premier Oliver Mowat's string of six consecutive majority wins, from 1871 to 1894.