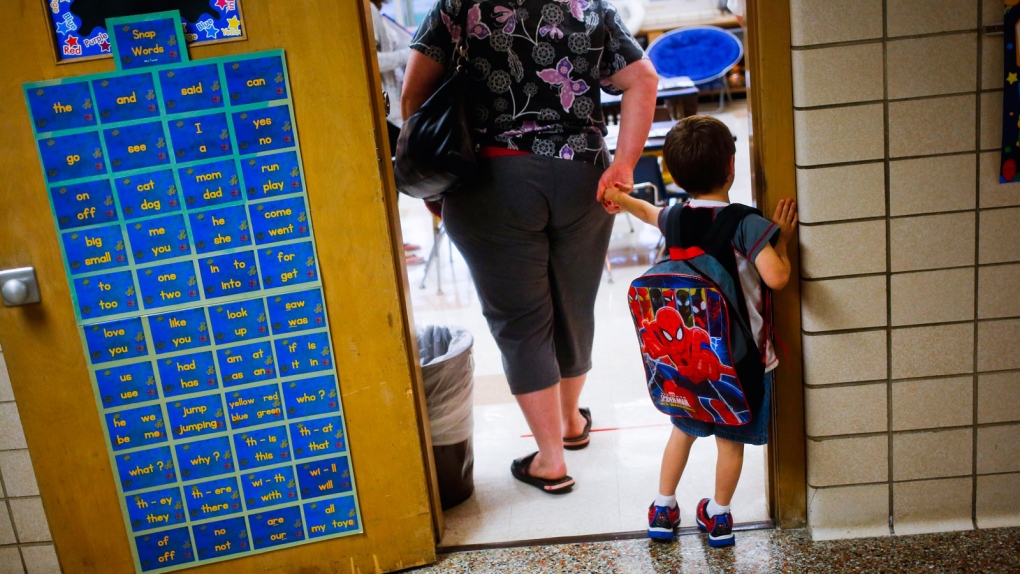 In this Sept. 8, 2015 file photo, a reluctant student is pulled into the first day of kindergarten at an elementary School in Clio, Mich. (Christian Randolph/The Flint Journal via AP, File)

The youngest children in kindergarten are more likely to be diagnosed with attention deficit hyperactivity disorder in early grades, a study shows, an intriguing finding for parents on the fence about when to start their child in school.

The study found younger students, especially boys, are also more likely to be started on medications for ADHD and kept on the drugs longer than the oldest children. The medications are generally safe, but can have harmful side effects.

"Doctors and therapists need to factor that into their decision-making," said study co-author Dr. Anupam Jena of Harvard Medical School. They should ask, "Does he really have ADHD, or is it because he needs six more months to mature? That extra year makes a big difference."

About 6 million U.S. children and teenagers have been diagnosed with ADHD, which causes inattention, hyperactivity and impulsivity. The rate of diagnosis is climbing.

The study, published Wednesday by the New England Journal of Medicine, stemmed from a lunchroom conversation about "kindergarten redshirting" for a co-author's son. The term is borrowed from athletics and means waiting a year to give a child time to mature.

"The parents were thinking about whether or not to hold their child back an additional year," Jena recalled. That led the researchers to ask, "What happens to kids who are in the same class who are perceived to be different?"

They used insurance claims to compare more than 71,000 students with August and September birthdays in 18 states with Sept. 1 cutoffs. A child who turns 5 before Sept. 1 can start kindergarten. If not, the child waits until the next year. An August birthday can mean a child is the youngest in class while those born in September are the oldest.

There was no group difference before age 4; it showed up after school enrolment.

The researchers also looked at asthma, diabetes and obesity rates and found they were the same for the August and September babies. And no other month-to-month comparison showed a sharp difference in ADHD.

Finally, using insurance data for more than 400,000 children in all 50 states, the researchers looked at states that don't use a Sept. 1 cutoff and the effect disappeared.

"They did so many careful (checks) to make sure of their findings. It was really striking it was so consistent," said Dr. William Cooper, a pediatrics and health policy professor at Vanderbilt University in Nashville, who wasn't involved in the research.

Cooper said younger children can have more trouble paying attention, sitting still and controlling their impulses. Compared to other kids, they may look like they have ADHD.

The study didn't evaluate whether the children were diagnosed appropriately. The August-September difference could be a reflection of spotting actual cases of ADHD earlier in the August-born kids because of their early start to school, said Dr. Jonathan Posner, an associate professor of psychiatry at Columbia University Medical Center in New York.

On the other hand, since there's no lab test for ADHD, doctors rely on subjective observations from parents and teachers. A younger student may simply need time to catch up, but his immature behaviour looks like ADHD and raises a teacher's concern, said Posner, who wasn't involved in the study.

"The information we receive about a child has to be interpreted within a developmental context," Posner said. "A 4-year-old isn't going to respond as well to academic challenges as a 5-year-old."

ADHD stimulant medications are generally considered safe, Posner said, but some children have side effects such as lowered appetite, sleep troubles and afternoon rebounds of hyperactivity.

The study didn't include kids covered by Medicaid, the government insurance program that serves 35 million low-income children. Other research has shown children on Medicaid are more likely to be diagnosed with ADHD, which may account for the low rates of diagnosis in the new study, Jena said.