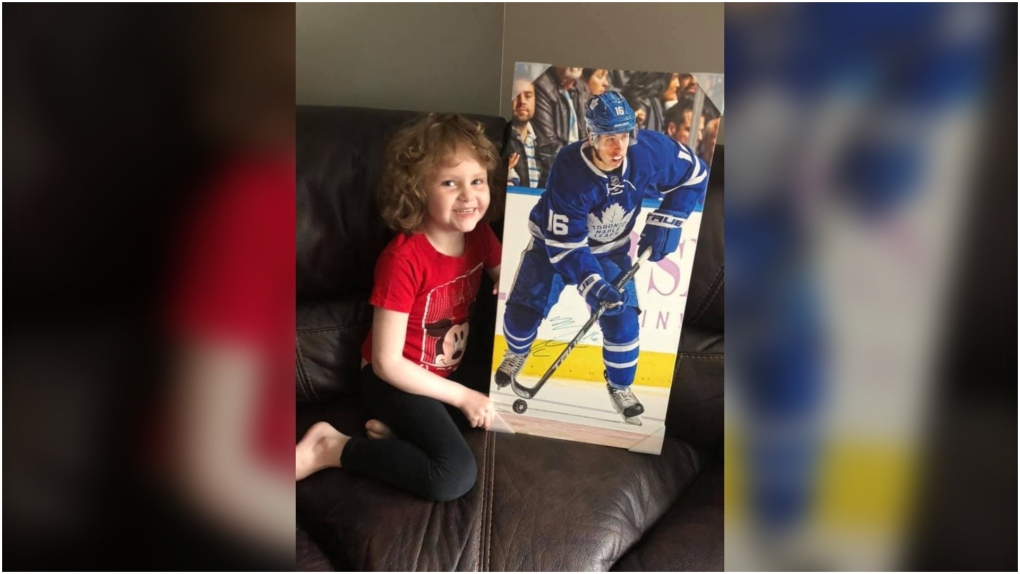 “After an incredibly brave nearly six year battle with leukemia, we are broken-hearted to share that our sweet Hayden passed away last night,” Lindsay Foulon wrote on Facebook.

“Words aren’t big enough to describe the impact this incredible girl had on this world or how hard she fought to stay here, right to the very end. No one dreamed bigger, laughed louder or loved life more than her and we know she touched the lives of many of you during her journey.”

One of the many people Hayden Foulon inspired during her short life was the Toronto Maple Leafs’ Mitch Marner.

The right winger first met the young girl when he was playing for the London Knights.

"Me and [Christian] Dvorak used to go to hospital visits once or twice a week. We would try to put smiles on her face and those kids leave an impression on you as well," Marner said, speaking to TSN’s Mark Masters.

"She's been battling her whole life, hope she gets the help and support she needs. To be that young fighting for that much stuff, it’s amazing to see."

Marner kept in contact with Hayden Foulon over the years, sending her gifts for her birthday and inviting the family to an event hosted by his charity, the Marner Assist Fund Charity, in Toronto. The seven-year-old even got a chance to see her team play at last year’s home opener against the Montreal Canadians.

Marner reacted to the news on Twitter Monday afternoon saying, "it breaks my heart to know I’ll never be able to see you again."

"How you fought your battles always inspired me, you were my hero. I know you’ll be watching me from up above. I’ll miss you."

Hayden Foulon had been declared cancer-free in the spring of 2018, but the cancer returned after a follow-up test in July of the same year.

“Thank you for every well wish, big hug, thoughtful gift or love-filled prayer this community sent her (and us) over the course of her journey - we’re so grateful for every moment we had with her and know you all loved her like we did,” her mother continued on Facebook.

Last night we lost our little fighter Hayden. It breaks my heart to know I’ll never be able to see you again. How you fought your battles always inspired me, you were my hero. I know you’ll be watching me from up above. I’ll miss you. pic.twitter.com/Tk7mxZIXbS