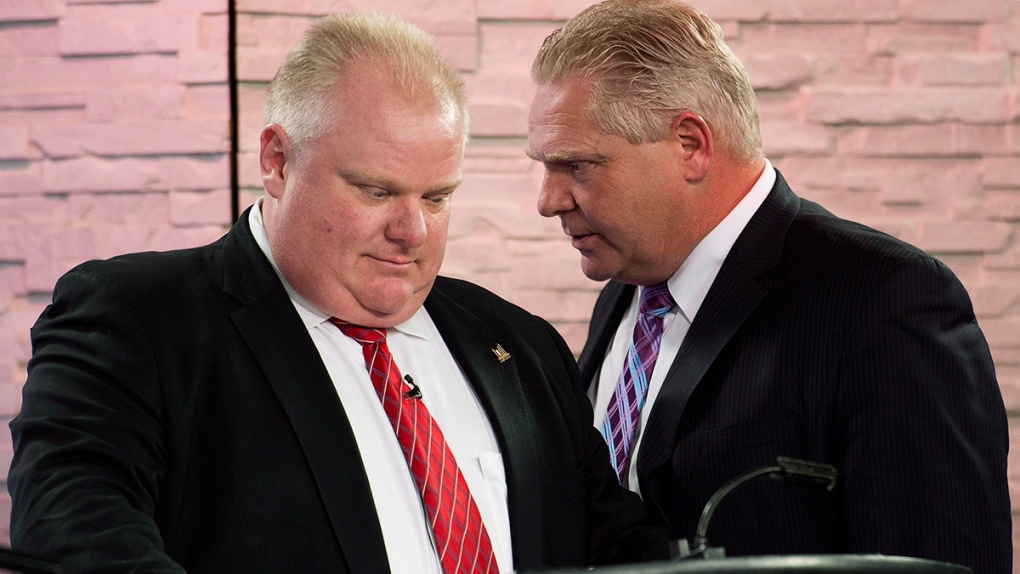 Rob Ford dropped out of the Toronto mayoral race on Friday and his brother Doug, a city councillor, signed up to run instead. While the brothers have a lot in common, there are some differences between the two.

Doug wasn’t as popular with voters in a recent poll

A Forum Research poll in May found that Rob had the support of 24 per cent of voters in a hypothetical race against Olivia Chow, John Tory and two other candidates, who have since dropped out. When Doug’s name replaced Rob’s in the same hypothetical race, Doug had only 20 per cent support. That shows Ford Nation may actually be Rob Ford Nation.

Doug thrived in the family business

An employee of Deco Labels, the Ford-owned company where Doug and Rob both worked after studying at university, told The Globe and Mail last year that, unlike his brother, “Robbie just did not have the passion for labels.” Rob left his Deco job when he was elected to council in 2000 while Doug stayed with the company until he joined city council in 2010.

In 2011 when Rob supported a new incinerator for human waste in Scarborough, Doug voted with the majority to kill the proposal. That same year, the mayor was the lone vote against accepting $100,000 in provincial funding to fight HIV and Syphilis; Doug voted with the rest of council.

Doug has avoided allegations of homophobia

Rob Ford’s voting record and avoidance of Pride has caused many in the LGBTQ community to accuse him of homophobia. He drew anger earlier this year when he was the lone vote against a motion to study the feasibility of setting aside 25 per cent of the city’s shelter beds for LGBTQ youth, who often feel unsafe at shelters. That same week, Rob Ford was the only councillor to remain seated during a standing ovation for the organizers of WorldPride. Doug, however, was quick to admonish a group of Ford Nation supporters who harassed LGBTQ protesters at this year’s Ford Fest, saying everyone should be welcome at the event.

Doug is a self-described vegetarian

While Rob Ford has been videotaped ranting in the Steak Queen restaurant and sneaking into KFC after vowing to lose weight, Doug Ford is a self-described “ethical vegetarian.” Doug said it was a decision he made after working in a meat-processing factory when he was young. In their 2012 ‘Cut the Waist Challenge,’ when the brothers vowed to lose 50 pounds in six months, vegetarian Doug was the clear winner. Rob lost only 17 of his 347 pounds, weighing in at 330 pounds. Doug lost 35 pounds, dropping from 275 to 240.