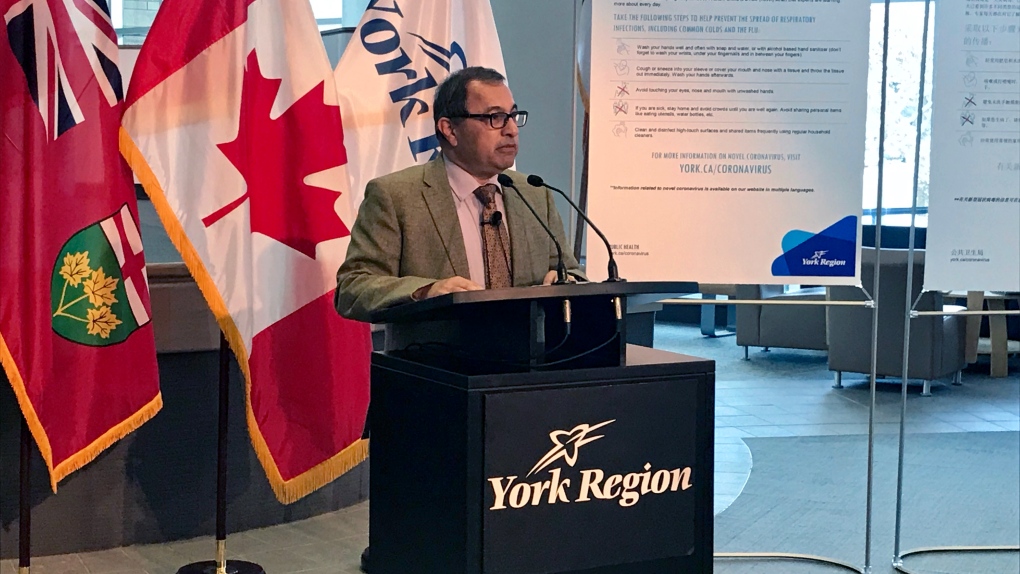 Dr. Karim Kurji, the York Region medical officer of health, spoke to reporters at a news conference Saturday about the first confirmed positive case of COVID-19 in his region.

TORONTO -- York Regional Council is expressing its confidence in Medical Officer of Health Dr. Karim Kurji after more than 2,000 people signed an online petition calling for his termination.

Kurji has frequently called on the province to loosen public health restrictions in York, even as the B.1.1.7. variant began to drive an exponential rise in cases and hospitalizations last month.

His opposition to the closure of businesses has often put him at odds with his counterparts in other GTA public health units, who have largely called for a more cautious approach amid the COVID-19 pandemic.

This week an online petition calling for Kurji to be fired over his refusal to order the closure of schools surfaced and has now amassed more than 2,200 signatures.

But York Regional Council is standing behind Kurji.

On Thursday afternoon it released a statement expressing its “continued support” of his leadership without explicitly referencing the petition.

“COVID-19 is unlike anything we have experienced before. The situation continues to change rapidly and the decisions of Dr. Kurji and Regional Council are made in the best interest of our community as a whole – not based on the needs and wants of individual groups or interests,” the statement reads. “In fact, Dr. Kurji’s philosophy throughout the pandemic is to treat our whole community as the patient. This approach has allowed York Region to take targeted action to reduce harms without inflicting new ones and better balance health and safety with economic vitality.”

Back on March 16 Kurji told CP24 that he believed his region could escape a damaging third wave of the pandemic through good case and contact management.

He also said that the region was not seeing the explosive growth in variant cases that had been predicted by modelling and was optimistic that they may have even plateaued. .

Those predictions, however, ended up being wrong and since then York Region has seen a fivefold increase in its rolling seven-day average (from 111 to 500) with the growth in cases largely driven by variants.

In its statement, York Regional Council said that the decisions that have been made by Kurji to date have been “evidenced-based and data-driven.”

They said that before making those decisions Kurji and his team at York Region Public Health “look closely at case and contact operations, advanced planning, enforcement capacity, vaccine operations and communications.”

Some experts have however, criticized Kurji for being slow to act.

In an interview with CP24 earlier this week, biostatistician Ryan Imgrund accused him of ignoring the science and putting the lives of York Region residents “at risk every time they leave the house.”

For his part, Kurji told CP24 earlier this week that he has simply acted in the best interest of York Region residents by considering other factors, such as the effect that the widespread closure of businesses have on mental health and the economy.

“We have never said you should be relaxed about the public health advice but what we have been saying is that if you were to find one or two restaurants that had a problem don’t bring down the whole restaurant industry because of that,” he said.