TORONTO -- The provincial government is looking into video that shows sexual acts recorded at a Milton, Ont. construction site, as the developer of the property says it’s also reviewing what it calls “grossly inappropriate and reckless behaviour.”

The video, recorded a week ago at a Milton construction site, shows several construction workers dancing with a woman in what appears to be a home under construction. One appears to perform a sex act with a young woman.

The gathering was a retirement party — but it got at least six people fired, with the construction industry aghast at what appear to be multiple safety violations, including people without safety gear on an active site, as well as creating a dangerous place for COVID-19 to spread.

“There’s not much in the video I don’t have a problem with,” said Andrew Pariser of RESCON, an association of residential builders. “No one in the video had any kind of mask on. They weren’t social distancing.”

Pariser’s colleague, Amina Dibe, told CTV News Toronto that what happened sends an awful message to women in the industry.

“It’s completely unacceptable and it reinforces stereotypes about construction being male-dominated and macho, which we’ve been actively trying to break down,” she said.

Valerie Scott, with Sex Professionals of Canada, said what she saw in the video is part of the job of a sex worker — but she was concerned that there was no personal protective equipment being worn and that the woman’s face would be spread over social media.

“She was doing a private gig. This has been going on for a couple of centuries,” she said. “But the lack of mask wearing and physical distancing is a problem, and that could have been solved by changing the venue.”

She said business had dropped substantially for sex workers during the pandemic, and without eligibility for some federal government programs, including the Canada Emergency Response Benefit (CERB), the woman may have felt she didn’t have a choice.

Mattamy Homes said the incident occurred on Friday at a home under construction in Milton. 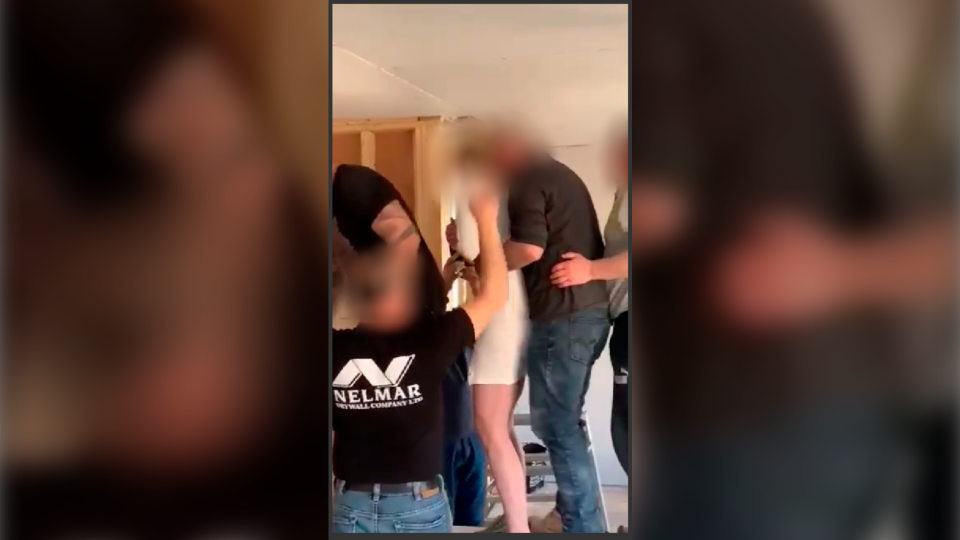 “Mattamy Homes has been made aware of an extremely inappropriate and entirely unacceptable incident that took place on Friday, April 9 at a home under construction on one of our job sites, involving an employee and subcontractors of one of our trade partners, Nelmar Drywall,” the company said in a statement sent to CP24.

“We hold our trade partners to a high standard and insist that they conduct themselves professionally and ethically. Those standards were not met in this case, and the individuals in question behaved in a grossly inappropriate and reckless fashion.”

“We nonetheless regret that this incident took place at one of our sites. We will be reinforcing with all our trade partners our zero-tolerance policies and clear expectations regarding workplace code of conduct as well as our strict COVID-19 protocols,” the statement read.

“Internally we are also reviewing our site security procedures and will make whatever adjustments may be necessary.”

Nelmar Drywall said it too was unaware of the incident until videos and images of the event began to circulate online. In statement, a lawyer representing the company said they quickly worked to identify those involved.

“Nelmar has terminated the employment of all persons involved in the incident depicted in the (videos/ images),” the statement read.

“While this incident is known to have happened at a Mattamy Home’s project, it should be known that neither Mattamy Homes nor any of its employees had any involvement in nor any knowledge of the conduct depicted in the (videos/ images) whatsoever; and, therefore, Mattamy Homes is not responsible for the incident.”

Ryan Whealy, acting press secretary for Minister Monte McNaughton said in a statement, “The Ministry of Labour, Training and Skills Development is aware of these disturbing images. That type of behavior is completely unacceptable and should never happen in the workplace. Our ministry is currently looking into this matter.”