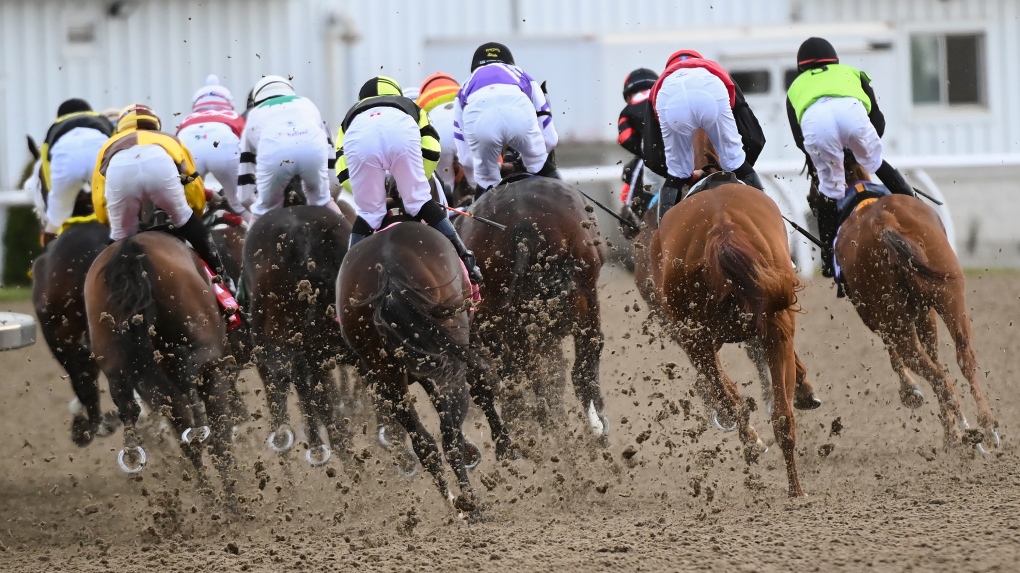 Horses kick up dirt as jockeys ride on the first corner during the running of the 161st Queen's Plate at Woodbine Racetrack in Toronto on Saturday, September 12, 2020. For the first time this year, champion mare Starship Jubilee will have home-track advantage when she lines up in the starter's gate. THE CANADIAN PRESS/Nathan Denette

TORONTO -- Woodbine Entertainment says it has officially cancelled the rest of its thoroughbred racing season following discussions with the Ontario government.

When Toronto was placed into a lockdown stage last week as part of the province's COVID-19 response, horse racing at Woodbine Racetrack was put on the restricted list.

Woodbine said earlier this week it was holding discussions with the provincial government about the change, but the track confirmed the season was over on Thursday.

Racing originally was scheduled to end on Dec. 13.

Under the new restrictions, horses can only train and not run in actual races. While there's been racing at Woodbine since June, all events have been conducted without fans in the stands.

The start of Woodbine's 2020 racing seasons -- standardbred and thoroughbred -- were delayed for several weeks due to the global pandemic before being allowed to begin June 5 with harness racing at Woodbine Mohawk Park.

The '20 thoroughbred card began June 6 at Woodbine, marking the first pro sports event in Toronto during the pandemic.

Standardbred racing at Woodbine Mohawk Park in Campbelleville, Ont., will continue. That track is located roughly 64 kilometres west of Toronto and outside of the lockdown boundaries.

"While I am extremely disappointed we are not able to complete the 2020 thoroughbred meet, what we achieved this year in face of significant adversity is quite remarkable," Jim Lawson, CEO of Woodbine Entertainment, said in a statement.

"I have been around horse racing my entire life and I can proudly say that I have never seen the industry come together as it did throughout this year.

This report by The Canadian Press was first published Nov. 26, 2020.