On Halloween in 2011, Terie Elliott had a simple workplace accident, twisting her left ankle as she went down some stairs.

Initially, it was diagnosed as a sprained ankle and she was told she could go back to work. But a week later, she was off work, her ankle still black and blue.

It's not until December that she got an MRI and was told it was actually broken but it was too late to immobilize it.

The ensuing years were filled with efforts to control the pain. She took powerful drugs like Percocet, Lyrica, Gabapentin. She tried nerve blocks and surgery, she even visited a psychologist.

The constant pain made her a different person. She never went out and couldn’t even enjoy the motorcycle rides her boyfriend tried to bring her on. The vibration was too much for her ankle.

And at one point, she even considered amputation - anything to get rid of the pain.

Then last year, she was offered a new type of therapy — a peripheral nerve stimulator. The new device uses an external charger so she would not need to have a bulky battery implanted in such a narrow area.

"The idea is to implant a wire, which is also called a lead, to deliver electric current to a nerve that is not behaving properly," Doctor Anuj Bhatia, a pain specialist at Toronto Western Hospital, said.

Other nerve stimulators have been used in the past, usually to control chronic back pain. The wires were inserted into the spine and a battery was implanted to power the device. 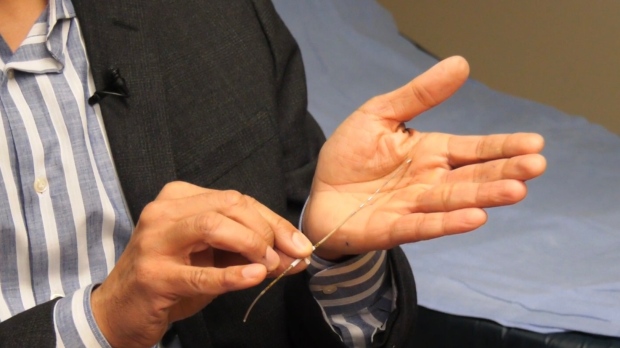 Dr. Bhatia felt a spinal implant was too invasive in Elliott’s case.Health Canada approved the battery-less version last year and when WSIB finally gave its permission, Elliott went ahead with the surgery in September. She was the first patient in Canada to receive device without the battery.

Now she said she's back to the person she was before her fall. She still has pain - the implant was only connected to one of the five damaged nerves in her foot. But it’s manageable. She's able to walk and bend and move around the gym where she now works.

The experience has made her grateful for the little things in life.

"People take things for granted," she said. "I will never again take my body for granted."