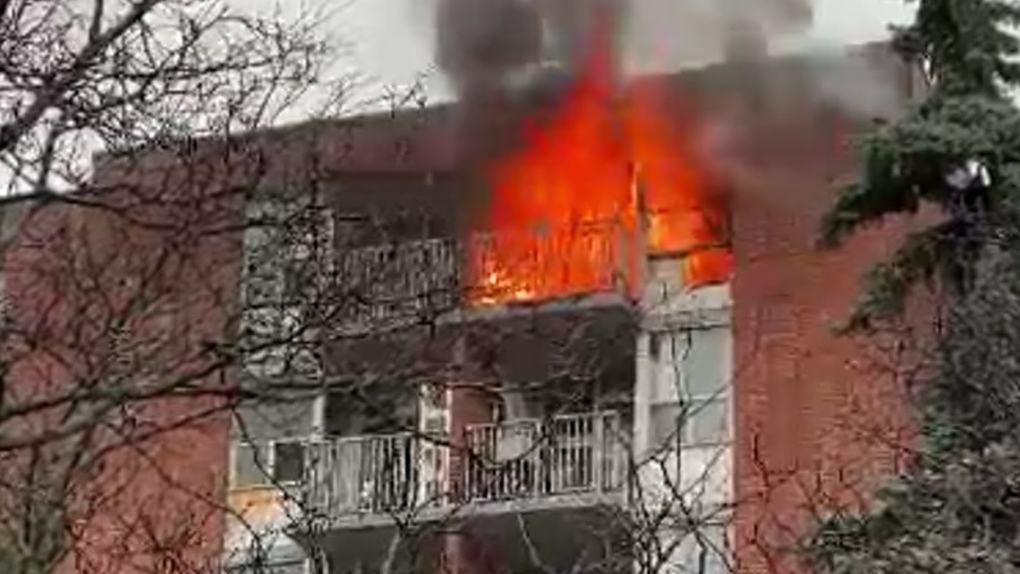 Flames are seen shooting from an apartment unit on the seventh floor of a building at 100 Cavell Avenue in Etobicoke on Nov. 30, 2020.

TORONTO -- Toronto's fire chief says there has been a fatality at an Etobicoke apartment for seniors after a woman was pulled from her unit amid heavy flames and thick smoke on Monday morning.

Fire crews responded to the building, at 100 Cavell Avenue, east of Royal York Road and south of Mimico GO station, just before 11:30 a.m. for reports of flames near the top of the seven-storey building.

Police said they had reports that a female occupant of the building was trapped due to flames. She was later pulled from the unit after firefighters or police breached the door to get her.

"I extend sincere condolences to family, friends and all those impacted by this morning’s fatal fire on Cavell Avenue. Our teams are working alongside Toronto Police and the Ontario Fire Marshal to determine the origin, cause and circumstances of this tragic fire."

Police said an officer injured themselves trying to get to her. They also said the woman who was rescued succumbed to her injuries at the scene.

Fire crews said earlier that the blaze was emanating from one unit of the building, which is a Toronto Community Housing property dedicated to seniors.

All residents of the building were carefully evacuated.

The injured officer suffered from smoke inhalation and will recover.