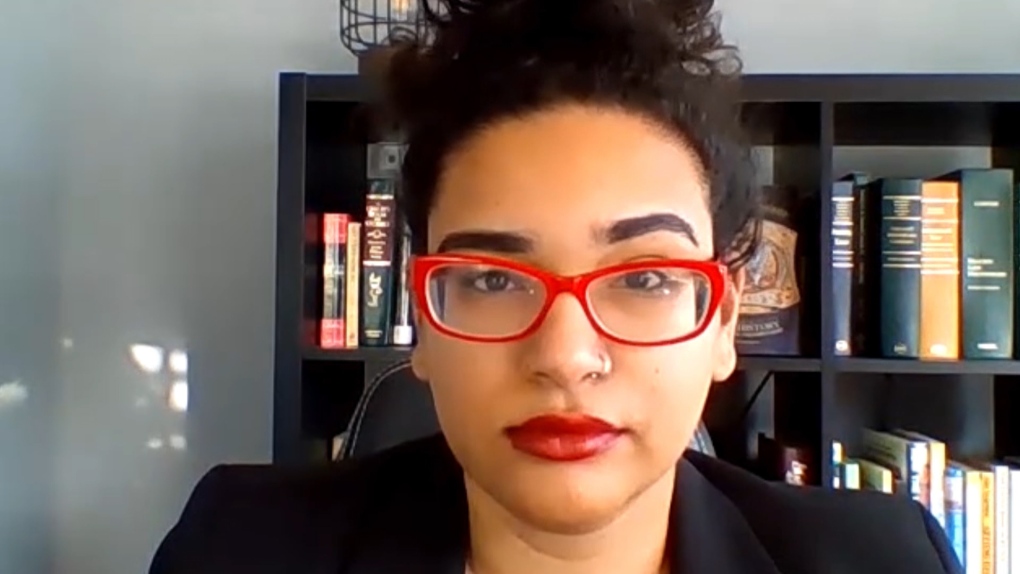 Lawyer Caryma Sa'd is seen in this undated photo.

Hamilton police say they charged a 33-year-old woman with trespassing on Thursday evening after a protest against Progressive Conservative Leader Doug Ford.

Police say a protest formed outside the John C. Munro Hamilton International Airport and eventually moved onto private property, blocking the road to a Cargojet facility.

The force said the protesters were asked to move off the roadway but one failed to comply and was arrested.

Lawyer Caryma Sa'd said she is the person who was arrested at the airport. She said she had a printed RSVP with her for the Ford event.

"I was not part of any protest group," Sa'd said in an interview. "I made that clear to everyone I spoke with, that I was attending the rally simply to document in my capacity as an interested resident of Ontario."

For everyone wondering about the “context” leading up to my arrest at Doug Ford’s rally, here it is.

I was at the property for around 20-30 minutes, much of which was spent waiting around for police. I was not blocking the hangar.#onpoli #OntarioVotes #Hamilton #GetTheFordOut pic.twitter.com/zbOR8sYBYG

Police and Sa'd agree that she was moved off the property and released with a ticket for trespass to property. She said she intends to fight the ticket in court.

This report by The Canadian Press was first published May 27, 2022.

Boy, 2, orphaned after both parents killed in Fourth of July parade shooting

Kevin McCarthy, 37, and Irina McCarthy, 35, the parents of a two-year-old boy, were among seven people killed in the Chicago-area mass shooting on July 4.

Jayland Walker was handcuffed when his body arrived at the medical examiner's office: autopsy report

Jayland Walker was handcuffed behind his back when his body arrived at the coroner's office to be processed as part of the investigation into the officers who shot and killed him in Akron last week, according to a medical examiner's report that was reviewed by CNN.

A high school friend of B.C. teen Amanda Todd has testified he took action when he saw what he described as a 'pornographic' picture of her on Facebook in November 2011.

The man charged with killing seven people when he unleashed a hail of bullets on an Independence Day parade from a rooftop in suburban Chicago legally bought the high-powered rifle used in the shooting and four other weapons, despite threatening violence, police said.