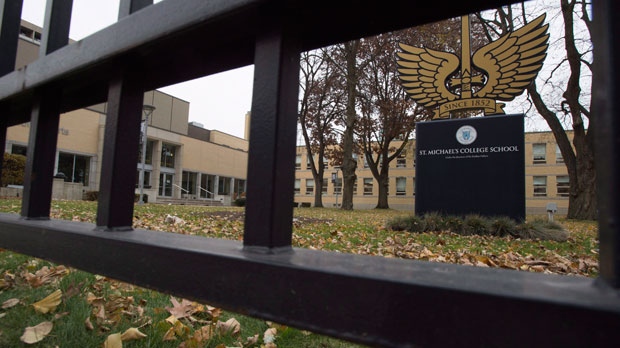 TORONTO -- A witness testifying at the trial of a teen accused of sexually assaulting a student at an all-boys Catholic school in Toronto has walked back his previous testimony on what happened.

The teen witness told court Thursday he now cannot remember who was involved in one of two sexual assaults that took place on the campus of St. Michael's College School in 2018.

On the last day of his previous testimony in early February, the witness testified that the accused ripped down the pants of the victim before another teen shoved a broom handle into his anus.

A lawyer for the accused teen pointed out discrepancies between the witness's testimony last month and what he told police more than two years ago.

"You say 'there were so many people around so you can't really see if the guys are just pushing his friends or if he's grabbing one of the guy's arms or something like that,' correct?" Geary Tomlinson asked the witness.

No young person in the case can be named due to provisions in the Youth Criminal Justice Act.

Court has heard from several students who identified the accused teen as being part of both incidents.

The teen witness also changed his previous testimony story on another alleged sexual assault with a broom that involved a third victim, which court has never heard about.

The witness could not identify the victim, but said he was not a part of the football team.

He initially testified the accused had sexually assaulted this third victim with a broom handle.

"You didn't see (the accused) put the broom in the guy's butt, correct?" Tomlinson asked.

The Nov. 7 incident in the football team's locker room was captured on video, shared on social media and eventually played in court.

One of them also pleaded guilty to making child pornography for recording one of the sex assaults in a video that was widely distributed.

Another student received a two-year probationary sentence with no jail time after pleading guilty. The charges against another student were withdrawn.

This report by The Canadian Press was first published March 25, 2021.