White Christmas for Toronto this year? Here’s what we know 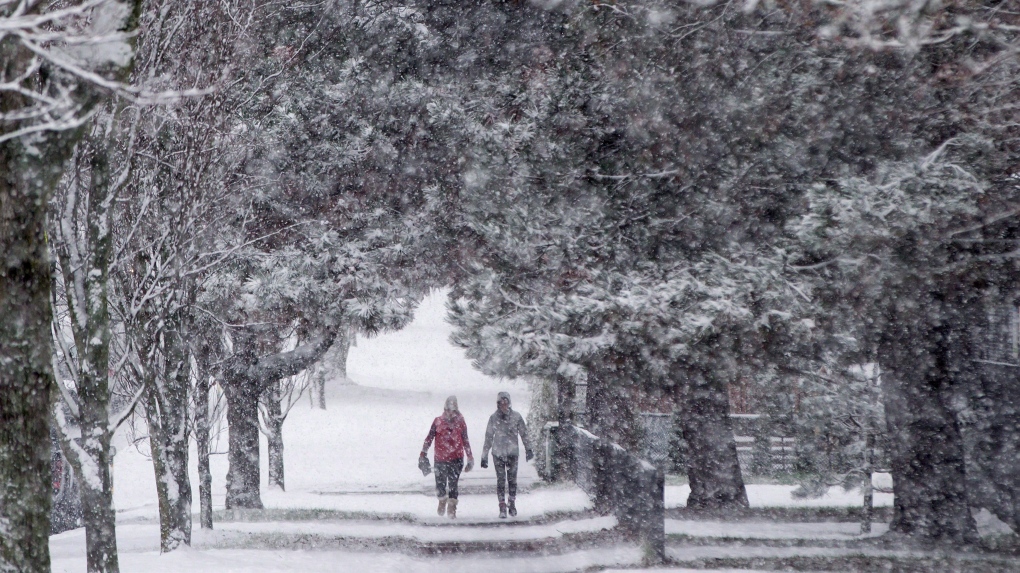 Pedestrians are framed by a canopy of trees as snow falls in Vancouver, B.C., on Friday December 9, 2016. THE CANADIAN PRESS/Darryl Dyck

TORONTO -- With one week left until the big day, Environment Canada shares the odds of snow sticking around in time for Christmas in Toronto.

Despite the snow squalls Wednesday and the frigid cold air at the end of the work week, the milder weather over the weekend will impact the city’s chances of having snow sticking around, the weather agency said.

“It’s going to be quite a challenge in the city,” Rob Kuhn, a meteorologist with Environment Canada told CTV News Toronto.

“We’re not seeing any significant systems in the forecast this week,” Kuhn said.

“Temperatures will also be above freezing this weekend. What that means, is any snow that’s on the ground as of Thursday is probably going to start to disappear.”

He added that areas outside of the downtown core have a better chance of the snow not melting away.

According to Environment Canada, a white Christmas is a day when there is two or more centimetres of snow on the ground the morning of Dec. 25.

“Basically, what is needed to cover the grass and make it look white outside,” Kuhn said.

Since 1994, Toronto’s long-term percentage of having a white Christmas has been about 45 per cent.

Even though the chances of Christmas 2019 being “white” are not strong, Kuhn said those wishing for more snow shouldn’t give up hope.

“Pay attention to the forecast because of course it can change as events draw closer,” he said.

“If we can get five centimetre of snow today, we stand a small (25 per cent) chance of enough of it remaining on the ground Christmas Day, if it stays cold enough.”

While the forecast currently looks dry for December 24, 25 and 26, Kuhn said that those travelling to visit family over the holidays should not let their guard down.

“Always be prepared for winter driving conditions. Even just a few flurries falling at the right time can make for slippery roads. Use common sense while travelling,” he said.

So far in 2019, December has brought close to normal temperatures in the Greater Toronto Area with about 50 millimetres of precipitation.

The month may end up being wetter than average after a colder than normal and snowy November, Kuhn said.