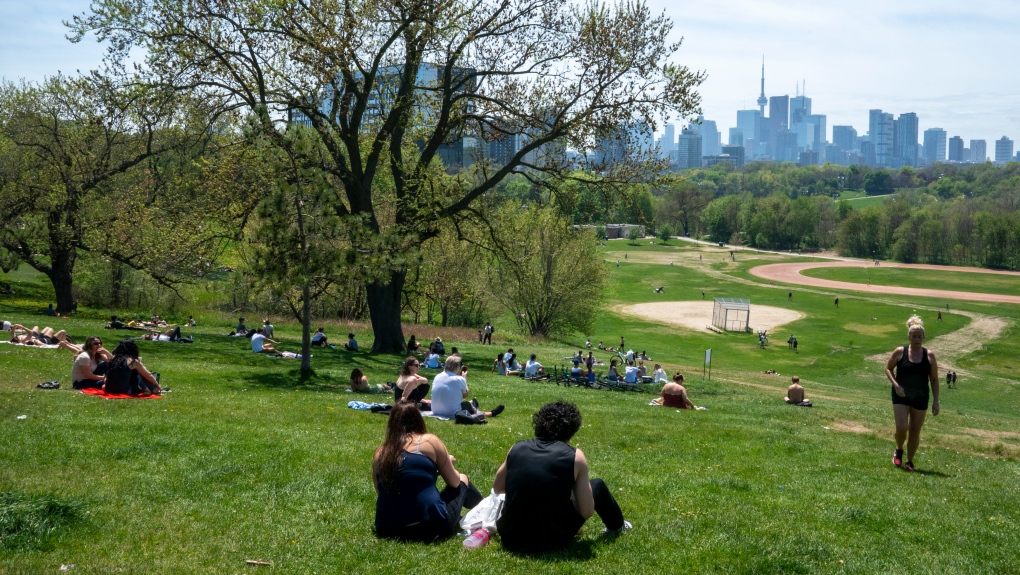 FILE -- Park visitors soak up the sun in Toronto on Saturday, May 23, 2020. Warm weather and a reduction in COVID-19 restrictions has many looking to the outdoors for relief. THE CANADIAN PRESS/Frank Gunn

Torontonians hoping to drink alcohol in public parks will have to wait another year.

Toronto City Council has voted in favour of a motion moved by Mayor John Tory to delay lifting its ban on outdoor drinking in parks until at least next year.

The vote came after a midtown city councillor tabled a motion, calling for a pilot project to permit drinking in city parks as soon as next weekend.

"If we're going to do this, if we're going to make any change, which I personally would think we could do, and do it responsibly and do it in a way that most people, the vast majority of people could accept, then we have to do it properly," Tory said in tabling the motion.

The motion specifically directs Parks, Forestry and Recreation to come up with a report that will include options to allow alcohol consumption in parks based on results of community consultations, safety considerations and a review of what other jurisdictions with a similar program learned.

"I support going about this the right way. I think that captures the broad consensus of council because I've actually spoken to the councillors. That's my job. And I want something to proceed on this in terms of some change and some improvement to the liquor laws as they presently exist in our parks or the consumption of liquor. I think this is the right way to go about it," he added.

City staff are expected to submit the report in the second quarter of 2023 to the Economic and Community Development Committee.

This is the second time the proposal from Toronto—St. Paul's Coun. Josh Matlow to allow alcohol drinking in public parks has been shelved. He brought forward a similar motion last April but was essentially shelved when members of the city's Economic and Community Development Committee referred it back to staff for further consideration, without specifically requesting that they report back.

Matlow's motion stated that the pilot would only permit the consumption of beverages that do not exceed 15 per cent alcohol by volume, essentially limiting the drinks that would be allowed to beer, wine and cider. The motion also stipulated that the consumption of alcoholic beverages would be prohibited "near playgrounds and sports fields, consistent with the prohibition on smoking."

As part of his motion, Matlow was also asking staff to ensure as many parks and beaches as possible have a bathroom facility, including portable toilets.

Before Tory's motion was carried by a vote of 17-2 and facing another delay, Matlow expressed his frustration with his fellow councillors.

"It just seems like this council looks for every possible reason to not deal with this question that so many residents have asked us to deal with, which is the fact that there are people in our city who have backyards, who can have family members and friends over for a drink and have a barbecue and catch up on life and be together. But there are so many Torontonians who don't live in buildings where they don't have outdoor access," he said.

"And they don't want to be treated like scofflaws every time they get together with a friend at the park and have a beer on a hot summer day or have a glass of wine with a picnic."

Matlow said alcohol consumption in public parks is not a new idea and has been adopted in other major cities around the world and in Canada.

"We are we are way behind the rest of the world," he said. "What we look like is the city council that keeps trying to find another reason because we're worried about the next phone call we're gonna get from somebody who doesn't like how somebody's behaving in a park. Well, let's deal with that problem."

- With files from Chris Fox