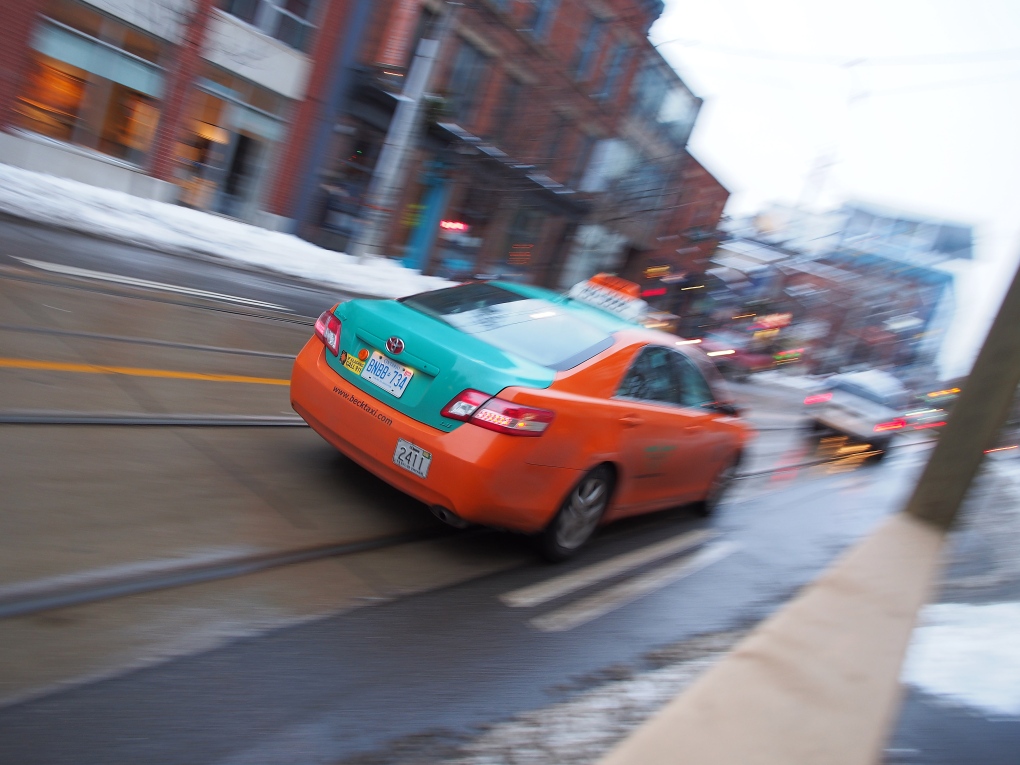 TORONTO -- Toronto's wheelchair-accessible taxi drivers say they are on strike because of "unfair" cuts by the city's transit commission.

The drivers, who are employed as subcontractors, were protesting a 30-cent wage decrease outside city hall on Tuesday.

May Lui, executive director of the iTaxiworkers Association which is representing the drivers, said the workers are "reluctant" to sign a five-year contract with a minimum fee of $2.50 per kilometre including HST.

"This minimum is not workable," Lui said, adding that the previous contract which expired on Saturday amounted to about $2.80 per kilometre with HST.

More than 60 drivers gathered at city hall to protest the cut, marching in a circle and holding cardboard signs with slogans such as "TTC is stealing HST" and "we are not asking for raise, we want same price."

In a Jan. 28 report, the TTC estimated that the 30-cent reduction would save approximately $2.1 million in the first year of the contract.

"Based on the understanding of the taxi industry, the TTC believes that, while lower than the current contract, the minimum amount of $2.50 provides adequate compensation for operators such that they will provide continuous and reliable Wheel-Trans service," the report reads.

TTC spokesman Brad Ross said the dispute "legally and contractually" is between the drivers and contracted companies, not with the TTC.

The TTC went through a public request for proposals that led to the new contract, Ross said, adding that the cab companies can choose to pay the drivers more than what is stipulated by the TTC.

"We recognize that it's less than what it was, but at the same time there's more opportunity for fares given the rising ridership of Wheel-Trans," he said.

While he said the TTC will have the option to levy penalties against the companies if they can't fulfil their contracts, Ross said he didn't want to comment on the possible repercussions of a long-term strike.

According to Lui, the companies can be fined $60 per ride if they can't provide a car, and with the drivers on strike, the "pressure is working."

Ahmed Ali, a spokesman for the drivers, said he has driven a wheelchair-licensed taxi in Toronto for the last 14 years.

"We do it from our heart," he said, adding that the drivers are being taken for granted. "These are vulnerable people, we treat them with respect and dignity."

Ali added that wheelchair-licensed taxis cost about $70,000 and must be replaced every seven years, plus drivers must pay for insurance and gas.

"When you calculate all these things and deduct from the income, we end up at $7.03 per hour which is against the law," he said, adding that this is well below the minimum wage of $11 in Ontario.

For another driver, Ahmed Mohamed, the $2.50-per-kilometre wage is akin to a 13-year set-back given his previous contracts.

"They are not really just cutting my wages by a little," he said.

"All of us have families, we work six days (a week). Nobody else will fight for our rights."

Lui said the drivers plan to continue protesting until the issue is resolved.