TORONTO -- Four people were taken to hospital after a wheel flew off a transport truck on Highway 401 and was struck by a vehicle that then set off a chain-reaction collision.

The transport truck was headed eastbound near McCowan Road at around 11:30 p.m. on Tuesday when a set of dual wheels became detached from its trailer.

Ontario Provincial Police say that one of the wheels bounced over a concrete median and ended up in the westbound express lanes. A vehicle then slammed into the wheel and set off a chain reaction collision involving four other vehicles.

4 people to hospital after wheels came off of a transport truck #Hwy401 near McCowan Road. Operator charged with Detached wheels - HTA 84.1 #CheckYourNuts pic.twitter.com/Jj57AaYW5V

Two-17-year-old girls in one of the vehicles involved in the crash were trapped “for some time” after their vehicle became “sandwiched” between two other vehicles, according to the OPP. They were then rushed to hospital with serious but non-life threatening injuries.

Two men in one of the other vehicles were also taken to hospital with minor injuries.

“The drivers that were approaching the wheel that had come to a rest already on the highway really had nowhere to go,” OPP Sgt. Kerry Schmidt told CP24 on Wednesday morning. “This could have easily turned fatal.”

The transport truck did not stop at the time of the crash but was later located at a Loblaws warehouse in Pickering.

Schmidt said that it is possible that the driver “may not have even realized the wheel had come off.” 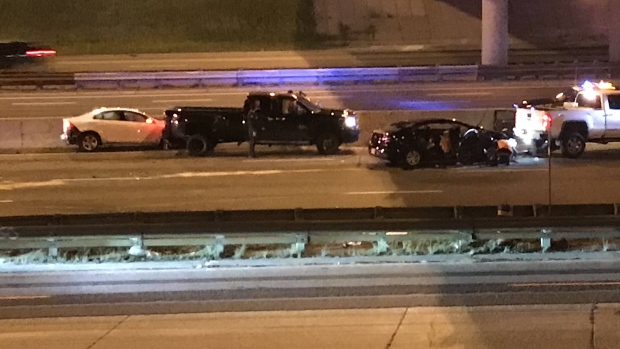 He said that officers have since inspected the transport truck and determined that the wheel became detached due to a “fastener issue.”

He said that the driver has been charged with a detached wheel offence and could face a fine of up to $50,000.

“We want to remind motorists that if you are getting maintenance done on your vehicle to please keep a close eye on your vehicle for a short time after the wheels have been installed because it can go from a good day, to a slight vibration and the next thing your wheels come flying off,” Schmidt warned.

Police confirmed late Wednesday that a 35-year-old man from Ajax has been charged in connection with the incident.