TORONTO -- Ontario public high school teachers will take part in a one-day strike on Wednesday after negotiations between the union and the provincial government fell apart.

The Ontario Secondary School Teacher’s Federation (OSSTF) has been in talks with the Progressive Conservative government for five days straight, desperately trying to find common ground. By Tuesday morning, the teacher’ union said the "two sides were “still very apart," but were still willing to continue bargaining until the 11:59 p.m. deadline.

Later that evening, the negotiations appeared to derail, with the union admitting the “odds are slim” that a strike would be averted.

At the stroke of midnight—the job action was confirmed. Members of the OSSTF will participate in a one-day, province-wide walkout.

Here's what that means for students, parents and teachers:

Will schools be open?

School boards have said that if the OSSTF decides to go on strike Wednesday; their facilities will be closed to students.

The Toronto District School Board said back in November that should there be a walkout, all secondary schools will be closed “as there would not be sufficient supervision to ensure their safety.”

“This would include all TDSB secondary schools, Adult Day Schools and Secondary Night Schools. Any out-of-school activities (e.g. field trips, sports, etc.) would also be cancelled on that day,” the board said.

All non-striking staff will still have to show up for work on Dec. 4.

OSSTF has announced that, should a tentative agreement not be reached, its members (teachers & education workers) will conduct a one-day walkout (full withdrawal of services) on Wednesday, December 4, 2019. For more information, please visit: https://t.co/9wYzouVKf3 pic.twitter.com/13kq5b24AZ

Should a collective agreement not be reached by midnight, all Durham District School Board secondary schools will be closed to students.

"After thoughtful consideration, we have determined t​hat student safety cannot be ensured during an OSSTF strike. As such, on Dec. 4, 2019, all secondary schools—grades 9 to 12—will be closed to students, unless progress is made in negotiations," the Peel school board said.

Secondary schools in the Halton District School Board will also be closed on Dec. 4.

“Families are encouraged to make contingency plans for their child, if required,” the school board said.

The York Region District School Board has also said that secondary schools will be closed to students.

Elementary schools will remain open in the above mentioned school boards, however both elementary and secondary schools in the French school board Conseil scolaire catholique MonAvenir have said they will be closed to students.

Why is the strike happening?

Harvey Bischof, the president of the OSSTF, said last week that issues on the table include wages, average class sizes and mandatory online courses.

"Bear in mind that before bargaining even began, this government unilaterally cut support staff, unilaterally cut services and then they told us the way to get those services back was to try to bargain back," Bischof said. "In other words, they leveraged students’ educational experience at the bargaining table."

Boschof said that the one-day strike is intended to “draw further attention to this government’s destructive cuts to the education system.” 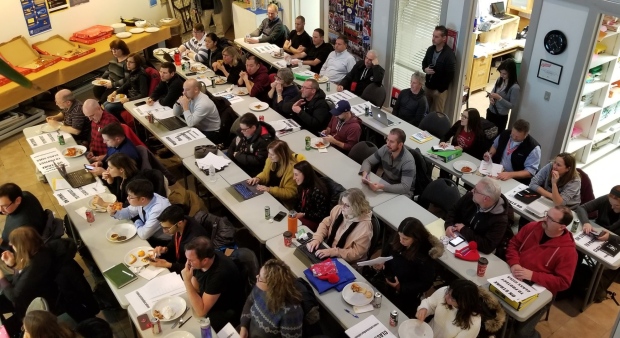 Ontario Education Minister Stephen Lecce has consistently called the union’s plan for job action escalation “unacceptable.” He has also claimed the unions have made no concessions while the province has made “major moves.”

"For 204 consecutive days, the teachers unions have made no moves at the bargaining table," Lecce said in the Legislature. "Every single entity at the table must be reasonable."

Around 9 p.m., Lecce held a news conference to call on the union to cancel its one-day strike, calling the job escalation “irresponsible.”

“It has been over 200 days since we first started bargaining with OSSTF and in that time they have not made any substantive moves since their first proposal was tabled,” Lecce said at the news conference.

Lecce said that he had called for third-party mediation to help “bring all the parties together” and continue the bargaining process “in good faith.” He then proceeded to blame the union for the bargaining standoff.

Bischof called the news conference a “stunt” and said the government had not put forward any meaningful proposals that would avert the strike. It was at this point he said that “odds are slim” that a deal will be made by midnight.

When is the strike over?

The strike is only one day and all teachers, support staff and educational workers will return on Dec. 5.