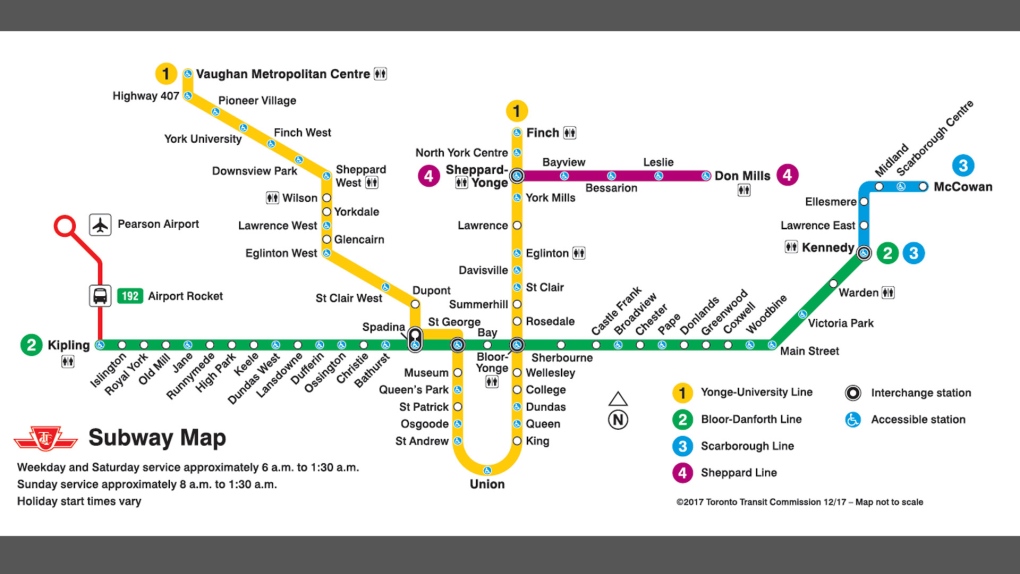 The new map of the TTC's subway system is shown, including the new six-stop extension into Vaughan. (Handout /TTC)

After years of waiting, the city’s 8.6-kilometre Line 1 extension will finally open this week, adding six new stops to the city’s subway system.

Starting Sunday morning, riders will be able to travel all the way to Vaughan Metropolitan Centre, near Jane Street and Highway 7, with stops at Downsview Park, Finch West, York University, Pioneer Village, and Highway 407 along the way.

Here’s what you need to know:

Where are the new stations?

Vaughan Metropolitan Centre Station (3150 Highway 7) – on the north side of Highway 7, less than a five-minute walk west of Jane Street.

Getting to the new stations

There will be nearly 3,000 parking spots spread across three of the new stations, with the largest lot at Pioneer Village Station (1,881 spaces). Highway 407 Station will have 583 spaces, while Finch West Station will have 347 spaces.

Parking will be free at the new lots until April.

Downsview Park Station will also function as a GO Station, with GO train service starting there on Dec. 30.

Vaughan Metropolitan Centre will also serve as a connection to the new rapidway bus line running across Highway 7 in Vaughan. A segment of the rapidway between Vaughan Metropolitan Centre and Dufferin Street is already complete and the line will eventually allow east-west travel across York Region between Pine Valley Drive and Unionville GO Station.

That’s how much longer the full trip along the entire length of Line 1 will be with the new extension. The full ride between Finch Station and Vaughan Metropolitan Centre is now 79 minutes.

Don’t look for a toll booth

The new stations will be the first to do away with toll booths. “Customer Service Agents” will be on-hand to help riders navigate the new system.

So how do you pay?

Customers can pay with a PRESTO card, Metropass, tickets, tokens, or exact cash. Presto cards will be sold at the new stations and there will be machines to top up your balance, however metropasses, tickets and tokens will not be sold.

You don’t have to pay twice

Customers will be able to ride the entire length of Line 1 on a single TTC fare, even when crossing into Vaughan on the subway. However you’ll need to pay again if you switch to another transit system, such as a York Region Transit bus (Customers crossing Steeles Avenue by bus elsewhere in the city will still have to pay an additional fare).

The extension features a new signalling system that will allow trains to run more frequently. The TTC says all six new stations are “modern, bright, fully accessible stations.” They will all be equipped with Wi-Fi, enhanced cellular service, new PRESTO fare gates and dedicated bicycle parking.

What will happen to bus service along the new routes?

A number of bus routes will change or be eliminated once subway service starts on Dec. 17. The 196 York University Rocket bus route will be discontinued and York Region Transit buses will replace service north of Steeles Avenue West on Weston Road, Jane Street, Keele Street and Dufferin Street. Click here to see a full list of changes.

What’s around some of the new stations?