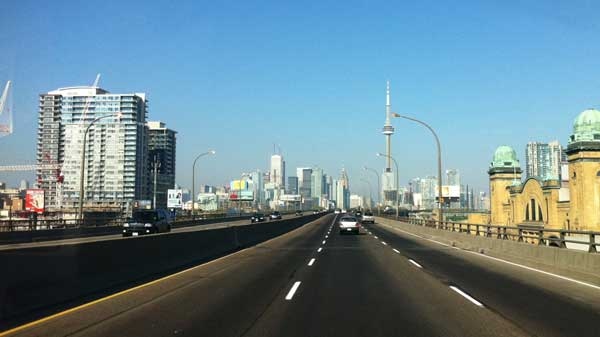 The Gardiner Expressway in Toronto after re-opening earlier this year after long weekend repairs.

Toronto drivers should start thinking now about how they can dodge road closures scheduled for Canada Day on Friday and the weekend.

There is a Canada Day celebration to be held at Queen's Park that will involve the closure of Queen's Park Circle from College Street West north to Charles Street. It begins at 6:30 a.m. and ends at 7 p.m.

The Canada Day Parade in Scarborough will result in the closure of Brimley Road from Progress Avenue to Ellesmere Road from 1 p.m. until 6 p.m.

Brimley will face a second closure from Ellesmere Road to Lawrence Avenue East from 3 p.m. until 8 p.m.

Ellesmere will be closed between Midland Avenue and McCowan Road from 4 p.m. to 5 p.m.

In the Corso Italia, St. Clair Avenue will be closed from Dufferin Street west to Lansdowne Avenue. The closure begins at 6 a.m. Saturday and ends at 11:59 p.m. on Sunday. Some local streets will also be affected as the area's Italian community holds its festival.

One of the main hubs of Pride is Church Street. It will be closed from Carlton north to Hayden Street from Friday at 6 p.m. until Monday at 6 a.m.

On Saturday, the Pride and Remembrance Run will take place along Wellesley Street, going from Jarvis Street west to Queen's Park Circle. Wellesley will be closed from 9 a.m. to noon.

The Dyke March starts at 2 p.m. Saturday and will affect parts of Church, Bloor and Yonge Streets, but the closures begin at 9 a.m.

The staging area is at Hayden St. The parade will go one block north to Bloor Street East, west to Yonge Street, south to Wood Street (just north of Carlton Street) before returning to Church Street.

That closure will end at 5 p.m. Saturday.

The weekend's biggest event is the Pride parade, which starts at 2 p.m. Sunday and continues until 6 p.m. However, closures will begin at 6 a.m.

The staging area is located on Rosedale Valley Road, from Bayview Avenue to Park Road.

The closures will end at 6 p.m.