TORONTO -- Thousands of teachers and supporters marched along the streets surrounding the Ontario legislature Friday during a provincewide strike to put bargaining pressure on the government, sending what union leaders hoped was a message of strength and unity.

The joint walkout by all four major teachers' unions marked the first time since 1997 that educators from all the labour groups were on strike on the same day, they said.

Teachers and education workers picketed at schools and other sites across the province, but the largest demonstration by far took place at the provincial legislature in Toronto.

The road encircling the building was shut down to accommodate the massive protest. Teachers slowly walked nearly shoulder to shoulder around the roughly one to 1 1/2-kilometre loop surrounding the building, carrying signs decrying the Doug Ford government's education agenda.

"It's a demonstration that we're not divided from our members or from the public in this province," said Harvey Bischof, president of the Ontario Secondary School Teachers' Federation.

"It's time the government listened to front-line educators and to parents because they are speaking with largely one voice about what they want." 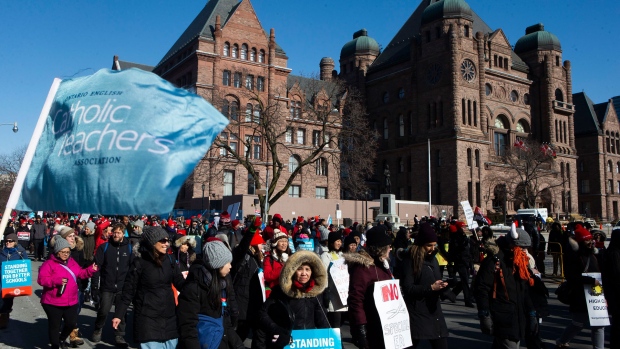 Gus Ritacca, a father of two kids in elementary school, walked slowly against the flow of the picket line so marching teachers could see a sign of support he was holding.

He's seen firsthand the dedication of teachers in the school system and he supports them in this contract dispute with the government, he said.

"I think this is truly about the level of education and the quality of education our kids are going to receive," Ritacca said. "I do believe that if push came to shove on the salary issue, a deal could be had there. I don't believe that's the core issue."

The teachers, particularly those at the secondary level, have repeatedly spoken out against government education plans unveiled last March. The Progressive Conservatives announced they would increase average high school class sizes from 22 to 28 -- which would lead to thousands of fewer teachers in the system -- and require students to take four e-learning courses to graduate.

The government has partly backed off on both issues, offering to instead increase average high school class sizes to 25 and require two online learning courses, but the unions say that doesn't go far enough. 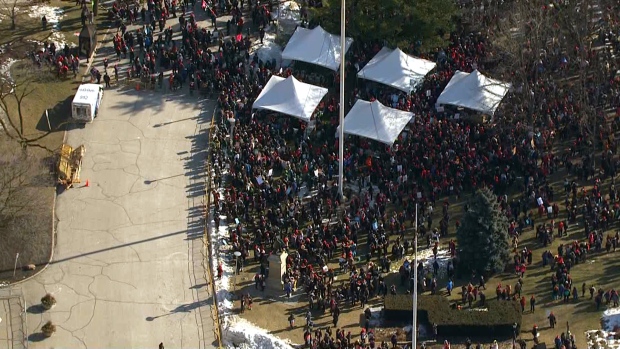 All of the teachers' unions are asking for around two per cent in annual salary increases, while the government won't budge beyond offering one per cent. It passed legislation last year capping wage hikes for all public sector workers at one per cent for three years, which the unions are challenging in court.

Sam Hammond, the president of the Elementary Teachers' Federation of Ontario, issued a challenge Friday to Ford and Education Minister Stephen Lecce.

Speaking from inside the legislature, Lecce noted that some progress had been made this week at the bargaining table with some unions and said it was unfortunate the strike went ahead.

"The fact that they opted to pause that momentum, in effect, to strike today I think is really unfair to kids," he said. "We should have been negotiating today." 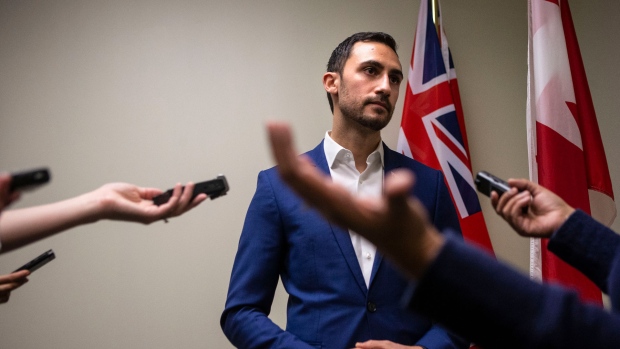 The province held talks this week with both the Ontario English Catholic Teachers' Association and the union representing French-language teachers. OECTA President Liz Stuart said there were "meaningful" conversations with the Catholic teachers, but big stumbling blocks remain.

OECTA announced late Friday that their talks with the government will resume Monday, and they are therefore suspending rotating strikes they had planned for next week. The French teachers also have bargaining dates next week.

Bargaining with high school teachers has been stalled for two months. The elementary teachers have said they were close to agreements on key issues in late January, but the government negotiators changed positions at the last minute.

Teachers from all four unions not only oppose the higher class sizes and mandatory e-learning courses, but are angered that those proposals came outside the bargaining process. The labour groups contend those are issues that should have been presented and negotiated at the table.


this is the first time in 23 years that all four teachers + edu workers unions are on strike on the same day#onpoli #onted pic.twitter.com/cgcvk4CWRK

Lecce would not say Friday if he thought that approach -- announced by the former education minister -- was a mistake.

"Right now my focus is to get a deal that keeps kids in class and I'm happy to provide an element of punditry when this is done," he said.

OSSTF announced Friday that it would resume its weekly, rotating strikes next week by walking out at several boards, including Ottawa-Carleton, Durham, Hamilton-Wentworth, Upper Grand, Upper Canada, Bluewater and several northern boards.

This report by The Canadian Press was first published Feb. 21, 2020.