TORONTO -- Protesters in downtown Toronto called on the Ontario government to not delay the implementation of its new needs-based funding program for children with autism after a deeply unpopular overhaul of the program a year ago.

The provincial government backtracked on its initial plan to update the Ontario Autism Program after it faced severe criticism, and it promised to provide new treatment options and funding by April 2020.

Protesters and organizers on Tuesday said they are concerned after Todd Smith, the Minister of Children, Community and Social Services, announced plans to delay the new funding arrangement by almost a year.

“We are back here today to say the autism community is not okay,” Laura Kirby-McIntosh, the president of the Ontario Autism Coalition said. “These families were in crisis a year ago, and I’m really worried about our families now, we can’t wait.” 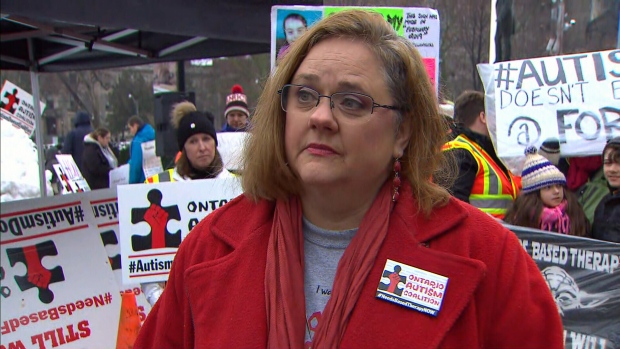 She said families need immediate access to treatment options and funding to support their children with autism, adding that people have had to take on second mortgages and loans in the absence of the funding.

“Minister Todd Smith, five days before Christmas, announced that we will have to wait an additional year for the needs-based therapy program that’s been promised to us, and these families are here because they can’t wait that long,” Kirby-McIntosh said. “For a lot of these parents it’s absolute desperation.”

Angela Brandt, whose 14 year old son has autism, said she had to remortgage here home and cash in RRSP's to provide for him.

Another parent told CTV News Toronto that she attended the rally hoping the government will implement better programs for adults on the spectrum.

"What will happen to the children of today when they get to be where I am tomorrow," Elsbeth Dodman, a 31-year-old woman with autism, asked. "Getting people meaningful employment so that they can afford housing, so they can afford groceries and to live independently."

Kirby-McIntosh said that five buses from across Ontario came to attend the protest at Queen’s Park, where the Ontario legislature resumed after its winter break.

On Tuesday, we will #FillTheLawn at Queen’s Park again to remind @fordnation and @ToddSmithPC that #WeAreNotOK. The autism community is still in chaos, with no clear idea of when to expect #NeedsBasedTherapy. RT and tell us why you’ll be there! #AutismDoesntEndAtFord

The Ontario Autism Coalition partnered with CUPE Ontario to hold the rally at around 11:30 a.m.

“This is compounded by announcements last year that also saw cuts to funding for community based supports, and that saw the loss of critical services families rely on."

Smith told the legislature on Tuesday that "no government has gotten this file right in 30 years and that is why we took the unprecedented step over the summer to head out on a province-wide tour and meet with parents face to face and understand issue around the autism file that wasn't working for them.”

The Minister added the government now has a $600 million funded program.

"We're bound to get this right " he told Question Period.

Ontario New Democratic Leader Andrea Horwath responded, saying that "things have gone from bad to worse in this province for children with autism and it is heartbreaking to see what those kids are going through".