'We are rising': Thousands march in downtown Toronto on International Women's Day

TORONTO -- Thousands of people marched in downtown Toronto on International Women’s Day in support of equal rights and to prove that women “are rising.”

International Women’s Day has been celebrated every March 8 since 1911 and is meant to celebrate the achievements of women and provide an opportunity to reflect on what needs to be done in order to achieve true gender parity.

This year’s theme was “Each for Equal,” which promotes the idea that gender equality is a global issue and that everyone, as individuals, are responsible for enabling it.

In Toronto, thousands of people gathered on Sunday at the Ontario Institute for Studies in Education around 1 p.m. near St. George Street before marching down Bloor Street towards Ryerson University.

The Toronto march organizers chose a subtheme for International Women’s Day, “the world is on fire, we are rising,” which was written in large lettering on a sign that led the group. 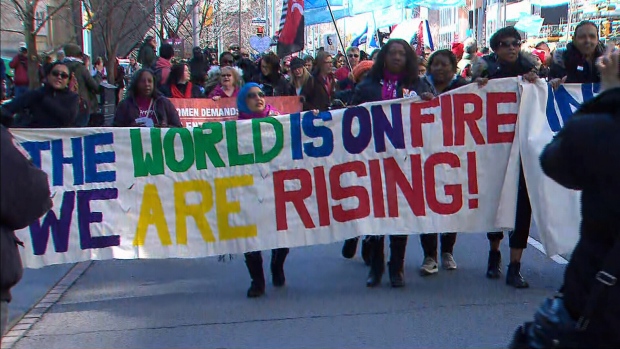 Repeating a series of chants, including “no justice, no peace,” one participant said that the movement has continued to grow in terms of numbers.

“Although things have been cut and although we know that Doug Ford is taking away women’s rights and women’s issues and even the rape crisis centres, we are not giving up.”

Megan Whitfield, president of the Canadian Union of Postal Workers, told CP24 that she credits trailblazers who worked before her for her being able to achieve her position.

“Never underestimate the power of a woman,” she said. “As the world is on fire we will burn, but we will rise and we will accomplish and achieve.”

Leading the group was Catherine Brooks, an Indigenous woman who said that issues such as the environment and housing play an integral part in equal rights.

“It feels like we are finally realizing we are allies and we are stronger together,” she said. “We are in this together because our world is on fire and we need to preserve it for future generations.”

When asked what she hopes younger generations take away from the march, Brooks said she wants youth to understand that they are the future.

‘Together we can create a gender equal world’

Toronto Mayor John Tory took to Twitter Sunday morning to say that he was proud to proclaim International Women’s Day in Toronto.

Proud to proclaim #InternationalWomensDay in the @CityofToronto as we celebrate the courage, determination and exceptional contributions women have made in communities across our city, while recognizing the need for continued work to achieve gender equity and equality. #IWD2020 pic.twitter.com/p9mwDS452O

On #IWD2020 we remember there is still an ongoing struggle for gender equality. It is also a day to celebrate the women who, through their acts of courage and determination, have played extraordinary roles in creating positive change in their communities. #EachForEqual pic.twitter.com/cQVis7vHCE

The Toronto sign will be lit purple Sunday evening in recognition of International Women’s Day.

The Toronto Maple Leafs and the Toronto Raptors also posted messages supporting gender equality on social media. The Raptors wrote that the team was celebrating “all the women who raise the bar for a brighter future.”

Not just today, but every day we celebrate all the women who raise the bar for a brighter future.#IWD2020 | #WeTheNorth pic.twitter.com/R07kwDykrK

The Leafs posted a series of videos by female hockey players and businesswomen sharing supportive messages and advice for other women.

On #InternationalWomensDay, we are turning our channels over to the women who are contributing to the growth of the game and furthering gender equality by their actions in hockey.