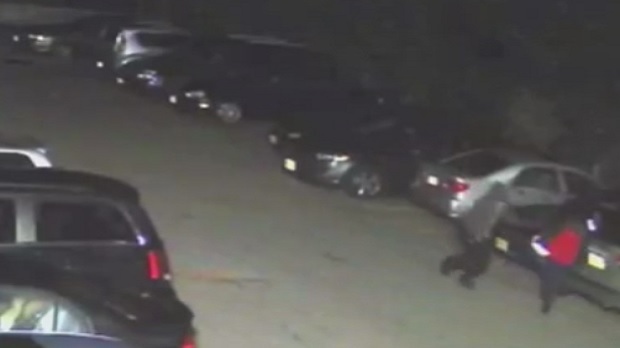 This still photo was taken from a security camera video released by police. It shows a suspect attacking a man in a Scarborough parking lot in September.

Toronto police have released a security camera video of a man wanted in connection with an attempted murder investigation in Scarborough’s West Hill neighbourhood last month.

The incident occurred just after 3:30 a.m. in a parking lot near Morningside and Lawrence avenues on Sept. 9.

A 53-year-old man was attacked by a suspect armed with two knives, according to police.

After the attack, the suspect fled toward Deekshill Park.

Police have released a security camera video of the suspect, who is described as a man aged 20 to 30 with a thin build. He was last seen wearing a grey hooded shirt over a light-coloured shirt with dark-coloured pants and black shoes.