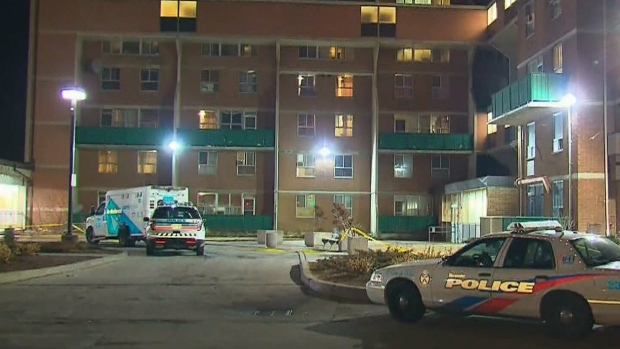 Police vehicles block the scene of two shootings in Etobicoke on Tuesday, March 17, 2015.

Police are searching for a 24-year-old suspect two months after a 21-year-old man was shot several times in Etobicoke.

A few hours later, officers were called to the same building for a second shooting. Another man, 22-year-old Malcolm Marfo, suffered several gunshot wounds to his arm, head and leg. He was later pronounced dead in hospital.

At the time, police said Marfo's death may have been a revenge killing in response to the first shooting.

On Friday, two months after the shootings took place, police said they'd been issued a warrant for the arrest of a man believed to be involved in the first shooting that day.

Abbas Mohammed, 24, of Toronto is wanted for attempted murder.

Police said the man is considered "armed and dangerous," and anyone who sees him should call 911 immediately.