TORONTO -- New surveillance footage shows the moments leading up to a 'brazen' shooting at a parking lot near Jane and St. Clair on Friday evening that seriously injured five people.

It happened in the area of Jane Street and Woolner Avenue, north of St. Clair Avenue West, just before 10:20 p.m.

In a video obtained by CTV News Toronto from a nearby business, it shows a dark-coloured vehicle driving into the parking lot where dozens of people, including a child, have gathered.

A few seconds later, as the vehicle drives by and out of the camera's view, people were seen suddenly scrambling for cover. Police said that was the moment the suspects began "indiscriminately" firing shots at the crowd.

The vehicle was then seen speeding away. 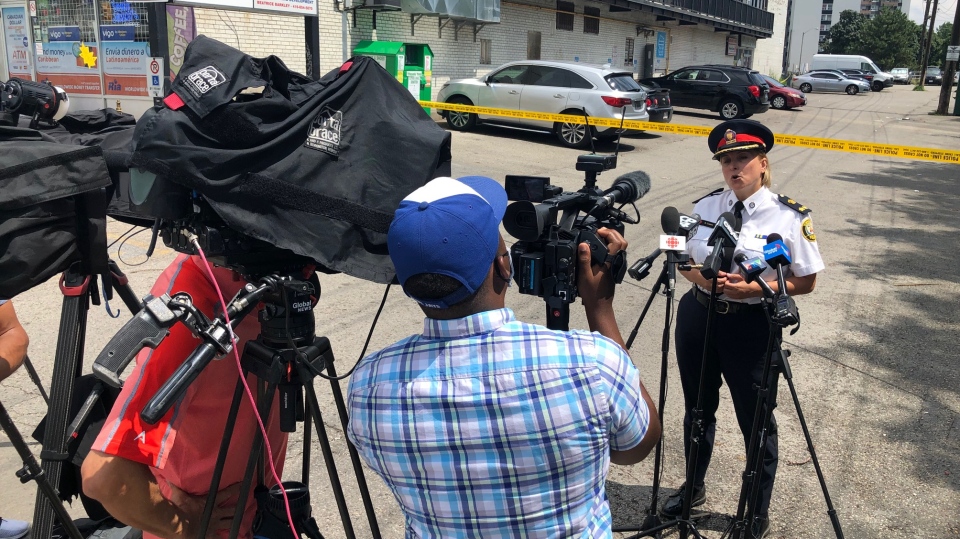 "A car drove up and opened fire into a group of people," Deputy Police Chief Shawna Coxon said Saturday at the scene. "The reason this is so concerning is it's a brazen shooting."

"We have had more than a dozen rounds recovered at this time."

Coxon said the gunmen opened fire into the group and that "innocent bystanders were at risk."

"It could have been much worse."

One victim, a 21-year-old man, remains in a life-threatening condition, while the four others are expected to survive, police said.

The suspects were last seen travelling east on Woolner Avenue in a grey or silver sedan.

Police have not released any suspect descriptions at this time.

It has been a violent 24 hours in Toronto, with more than six shootings reported.

Police said investigators are working to determine if there is a link between any of the shootings, but call the violence "concerning."