The ground shook, loud noise filled the air, smoke was seen billowing from above and just like that an 11-storey powerhouse along Lake Erie in Ontario fell to the ground.

Footage from CTV News Toronto captured the moment a massive building, which was once part of the world’s largest coal-fired power plant, crumbled to the ground.

The Ontario Power Generation (OPG) demolished the Nanticoke Generation Station on Thursday morning, more than one year after its twin powerhouse tumbled down. 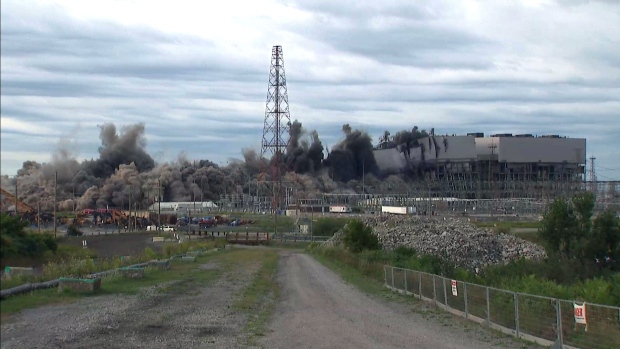 The demolition of the Nanticoke Generation Station on August 22, 2019 is seen. (CTV News Toronto)

The site manager, Dennis Randall, said the demolition of the “significant plant” was “bittersweet.”

“It’s a cradle-to-grave experience for me,” he said. “I assisted in the commissioning of this site back in 1971 and there are a lot of good people who provided a lot of expertise over a lot of years to the facility.”

“This facility provided electricity to the province of Ontario over several years.”

Randall called the move a step towards “a green energy generation.”

The Nanticoke Generation Station burned its last piece of coal back in 2013. Then, in March of this year, a new 44-megawatt solar facility began operating, “symbolizing the transition from coal to clean power at Nanticoke,” the OPG’s website said. 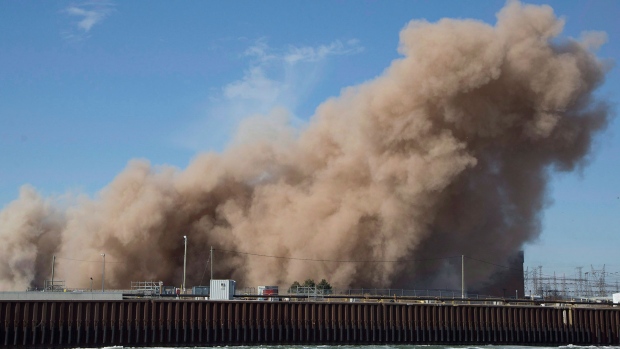 The former Nanticoke Generating Station came down during demolition in Nanticoke, Ont. on Wednesday, February 28, 2018. (The Canadian Press / Peter Power)

Before the powerhouse tumbled to the ground, a non-electric shock tube was used to detonate any charges, a perimeter check was conducted and a series of sirens were sounded to alert bystanders.

“It’s been a process where we’ve mechanically demolished what we could and at this point in time we used explosives to drop the powerhouse to a position where we could recover all the scrap material, most of which will be recycled,” Randall said.

As well, a floating membrane was installed to cover the water intake on the lake side of the powerhouse in an effort to protect Haldiman County’s water supply.

The blast was complete within about 30 seconds.

Cleanup efforts are now underway and contractors are on-site checking the area to give it the all-clear.