Victims of negligent lawyers falling through the mandatory compensation cracks 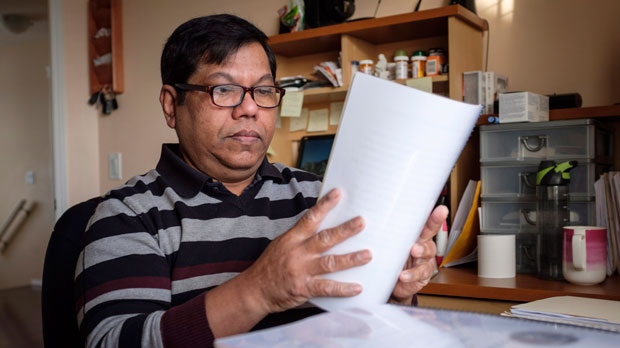 Nalliah Balachandran sorts through some of the legal documents he has accumulated at his home in Calgary, Alta., Tuesday, Dec. 4, 2018.(THE CANADIAN PRESS/Jeff McIntosh)

TORONTO -- Victims of negligent lawyers in Ontario are being cheated out of hundreds of thousands of dollars despite court-ordered awards in their favour because the insurance legal professionals must carry won't cover the losses.

Despite judicial criticism of the situation dating back decades, justice has often proven elusive when disbarred lawyers have no assets or hide any they do have, leaving clients high and dry.

"I am going soon bankrupt," said Nalliah Balachandran, 63, who now lives in Calgary. "I'm in the middle and I have lost everything."

For years, Balachandran has been unable to collect on the $188,646 in damages an Ontario Superior Court justice awarded him in 2012 against lawyer Michael (Mike) J. Webster, who was disbarred after an avalanche of complaints. Webster, who now describes himself as a franchise consultant, botched a legal dispute for his client. He did not respond to requests for comment.

Balachandran is not alone.

Other victims whose cases The Canadian Press reviewed lost out on compensation for car-crash injuries or ended up in jail because of lawyers who failed to do their jobs. They have not been able to collect on court-ordered damages awarded despite the legal profession's mandatory insurance.

"It is in the best interests of the proper administration of justice for litigants to expect that lawyers who represent them will be properly insured, thus protecting their interests," Superior Court Justice Kofi Barnes said in one such case in 2016.

The Law Society of Ontario, which governs the province's 50,000 lawyers, set up an insurance company more than two decades ago to defend and cover claims against its members. Lawyers must carry insurance from the Lawyers Professional Indemnity Company -- or LawPro --as a condition of their licences.

The company sees more than 2,500 new claims a year with annual payouts above $100 million and rising. Lawyers pay up to $5,000 by way of deductibles for LawPro to defend claims against them, and thousands more in higher premiums if a judgment favours the client.

"The coverage that the law society's mandatory insurance program provides is considered to be both in the best interests of the public and in the best interests of Ontario lawyers -- in that the public has reasonable assurance that an insurance policy backstops errors committed by lawyers in practice," LawPro said in its 2017 report to the law society.

But if a lawyer fails to report a claim to LawPro or won't co-operate with its investigation, the insurance company -- with about $743 million or 83 per cent of the law society's total assets -- denies coverage.

Toronto lawyer David Altshuller, who has spent years trying to help Balachandran and another client collect on default judgments LawPro refused to cover, said there needs to be a mechanism to deal with the loophole.

"My clients are out of luck. I'm out of luck," said Altshuller, who estimates he's racked up $6,000 in expenses and about $52,000 more in unbilled time for Balachandran.

"The law society should obviously act with due dispatch to get lawyers who have fallen off the path, stop them from practising law (and), in an ideal world, LawPro would have to respond to every claim."

For Brampton, Ont., lawyer Ava Hillier, the lack of an airtight system is appalling.

"The public would be horrified if they knew that the lawyer that they've hired had no insurance," she said.

Hillier is suing LawPro on behalf of a family that hasn't been able to collect on a court-ordered award from their former -- now disbarred -- lawyer.

Carolina Caputo and her husband were in a vehicle crash in 2004 that cost him his life and left her with serious injuries. Caputo hired Toronto lawyer Wayne Novak to guide them through the claims process but he failed to open a file.

Left without benefits, the Caputos sued Novak and notified LawPro of the action. In 2014, a judge awarded the couple about $321,500 after a trial that neither Novak nor LawPro defended.

LawPro refused to cover the award, citing Novak's failure to co-operate, although he insists he did try to help.

Hillier said the insurer should not be able to use the "ruse of non-co-operation" to deny coverage.

"It's very unfair and unfortunate -- and to my mind shocking in a way," she said. "People need to know that they've got nothing if their lawyer just decides not to pick up the phone."

Even Novak, who said he feels badly for his clients, decries LawPro's approach.

"We pay big insurance premiums, and they should belly up to the bar," Novak said.

In another case, Linofiel Eroma, charged in October 2008 with assault and weapons-related offences, hired Paul Slocombe, a longtime criminal lawyer who ended up being disbarred in 2011.

Despite Eroma's requests to testify in his own defence -- an immutable right of an accused -- and Slocombe's assurances he would do so, his trial ended in a conviction and intermittent 90-day sentence. Slocombe never called him to the stand.

After 17 weekends in jail, Eroma won bail pending an appeal. When Slocombe failed to file the paperwork required to extend his bail, Eroma was arrested in front of his employees in June 2011 and charged with being unlawfully at large. A new lawyer was able to get the charge withdrawn and succeeded in having the conviction quashed on appeal given Slocombe's conduct. Attempts to reach Slocombe for comment were unsuccessful.

Internal LawPro correspondence seen by The Canadian Press indicates the insurer knew Slocombe would be found liable on the basis of the Appeal Court ruling. They also knew the lawyer would be unable to pay any damages awarded.

"We should deny coverage or attempt to settle," a senior litigator with LawPro said in an internal note in November 2013. The decision was to deny coverage on the basis Slocombe hadn't co-operated.

Eroma won an undefended judgment against Slocombe in March 2015 now worth more than $130,000. He has not seen a penny.

A spokeswoman for LawPro said payments are made to clients of at-fault lawyers in about 14 per cent of its closed files.

"A coverage denial for a lack of co-operation by the insured is an extremely rare happening in my experience -- at most, a handful of times in any given year," said Naomi Dummett, LawPro's communications director.

Latest figures indicate an average of about 18 lawyers a year are disbarred or allowed to resign to avoid disbarment. Dozens more get reprimands or suspensions.

LawPro's approach is now under attack by way of a novel legal challenge: In mid-December, an Ontario court is scheduled to hear the Caputo case when Hillier will try to force the insurer to cover the judgment against Novak.

The Caputos want the court to find that LawPro owes Novak a debt they can garnish from the insurer -- the same way the taxman might collect taxes owing directly from a taxpayer's employer. LawPro is resisting.

Lawyer David Green, acting for Eroma at a similar hearing scheduled for January, said the courts will have to determine LawPro's obligations.

"Allowing LawPro to get off the hook would subvert the policy objective behind mandatory insurance," Green said.

The head of the law society, Malcolm Mercer, said the organization was open to looking at whether people have been denied redress unfairly. After all, he said, the aim is public protection.

"If there are more gaps that ought to be addressed...we will look at those," Mercer said in a recent interview.

The society does run a separate fund that currently reimburses up to $500,000 for losses due to a crooked lawyer -- but not where malpractice or negligence is involved.

However, Mercer said the law society adopted a policy in the mid-1990s to treat a lawyer's refusal to co-operate as dishonesty, giving victims access to the fund. While none of the lawyers approached by The Canadian Press said they had heard of the policy, the society said compensation had been paid out 12 times.

"If it turns out there's been problems, either because it's unknown, which may be an issue, or in terms of its application, that's worth looking at," Mercer said.

Days after that interview in late November, the law society updated its website to include reference to the 1997 policy.