TORONTO – Police have released video captured on the patio of a Markham, Ont. restaurant last month that appears to show a man snatch a wallet out of a woman’s purse.

The woman, who does not want to be identified, said it happened while she was having lunch by herself on a patio at Kelsey’s on Highway 7 near Woodbine Avenue on Sept. 25.

“I was really upset because I really did feel violated,” she told CTV News Toronto Friday. “It’s one thing if I would have dropped [or lost] it, but for somebody to actually walk in and look at you, and do it intentionally … you feel violated.”

The incident was captured on a surveillance camera and released by York Regional Police Friday. It shows two men seated behind her on the patio.

In the video, one of the men appears to reach into a purse that was slung over the chair of the woman behind him, and pulls out a wallet.

The video then shows the man appearing to place the wallet under his shirt before standing up and walking away from the table.

The victim said she noticed the two men walking in at the time, and remembers thinking that they seemed suspicious.

“They sat directly behind me … and one of them asked where the bathroom was, so he got up and went to the bathroom,” she said.

“Then two seconds later the other gentlemen got up and walked away and they never came back.” 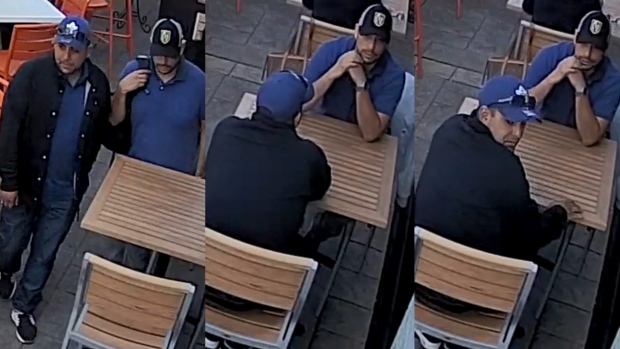 She said that as she was about to pay, she noticed she had no wallet with and asked the restaurant if she could come back to pay.

After searching her home, she said she realized the men may have taken her wallet.

She went back to the restaurant, which told her it had video surveillance of the incident and offered to cover her bill. The video was then shared with police, she said.

The woman said she saw the video for the first time when it was released to the public Friday.

“It made me uncomfortable, and it made me angry,” she said. “It shows that these people, this was the purpose for them coming in there … and that angers me because people work hard for the things they have.”

“I will never put my purse on my chair like that again,” she said. “I will always have it in front of me.”

She said her credit card was used for purchases costing around $500 at a gas station and a Shopper’s Drug Mart.

Her credit card company caught on to the fraudulent transactions just after an hour, called the victim, and eventually cancelled the credit card.

The suspects are described by police as white males, and that one is wearing a Vegas Golden Knights cap and the other is wearing a Toronto Maple Leafs cap.

Police are asking residents to be cautious and to protect themselves against these sorts of distraction-style thefts.

Anyone with further information regarding this incident is asked to contact police or Crime Stoppers.