A bright tangerine hue with a sheen, Drew Phillips-Gavin’s bike stood out from most others—a fact that helped him reunite with his beloved “Orange Julius” three weeks after it was stolen.

Phillips-Gavin’s bicycle had been taken while he was grabbing a bite with friends near Yonge and Gerrard streets on Aug. 22. The thief had cut through the lock - and it seems, was aboard the bike the day he stole another one that belonged to Ben James.

“The thief basically was riding that bike, and dropped that bike when he saw my bike,” James said on Wednesday.

The story of James’ bike’s theft was featured on CTV News Toronto last week, after a cab driver witnessed the thief cutting off the lock with a power tool - and caught the brazen robbery on video.

James believes the thief decided to ditch Phillips-Gavin’s bike for his once he came across it.

“No offence, but my bike is a lot nicer. It’s got very upgraded brakes and braking systems, and it’s a serious mountain bike. It can go pretty fast,” he said. 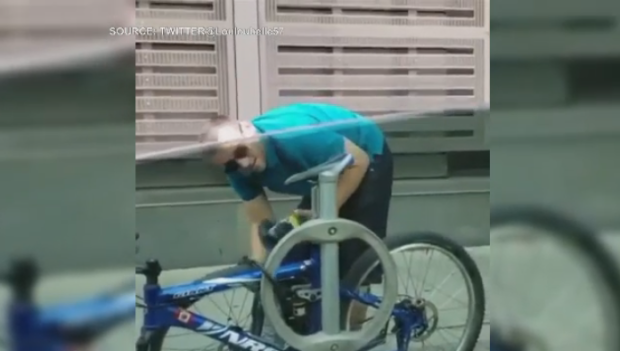 A man is seen in this video appearing to cut the lock of a bike. (Twitter)

James filed a police report but his stolen bike has not been recovered.

“To be honest, I feel like my bike's still not even in one piece anymore,” he said.

“It’s been to a chop-shop or sold to someone else.”

But the silver lining, he said, is that he was able to reunite Phillips-Gavin with his bike. Phillips-Gavin reached out to James’ mother over Twitter, as she was the one who first posted the cab driver’s video of the theft.

“I’m just really happy that it ends on a positive note,” said James.

Phillips-Gavin, meanwhile, was ecstatic to be back on his long-lost wheels.