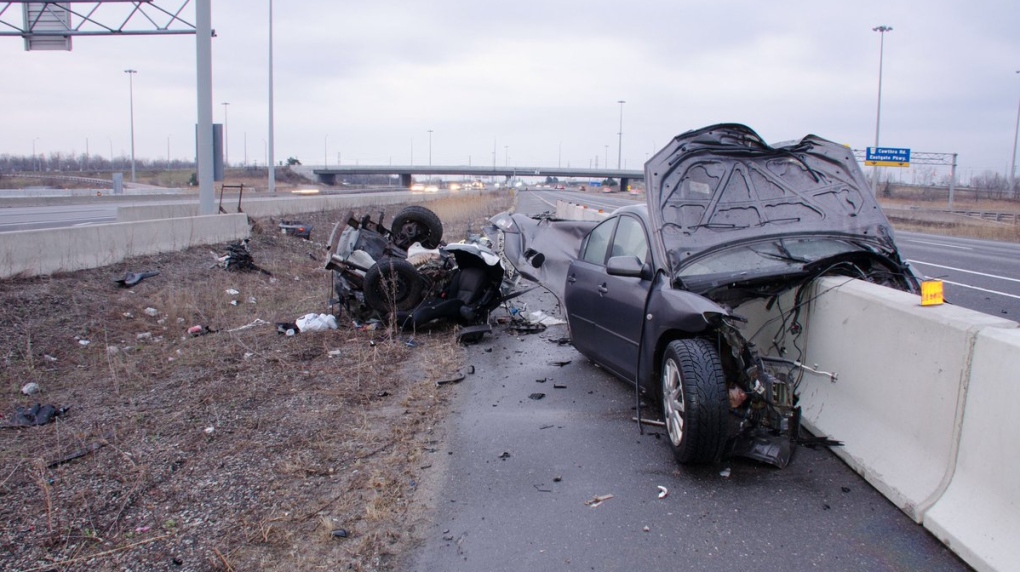 A vehicle involved in a deadly collision on Hwy. 403 early Saturday morning is shown. (OPP/Kerry Schmidt)

One person is dead after a vehicle travelling in the wrong direction on Highway 403 slammed into a concrete guardrail.

The collision happened in the westbound lanes of the highway near Eglinton Avenue in Mississauga at around 3:25 a.m.

Ontario Provincial Police say that the vehicle was travelling in the opposite direction of traffic when the collision occurred.

They say that they are still working to determine where the vehicle got onto the highway and how long it was travelling in the wrong direction before slamming into the median.

“We got the call prior to the collision and members from the Port Credit OPP were responding to reports of a possible wrong way driver. Sadly before the officers could get into position to intercept the vehicle the collision took place,” Sgt. Kerry Schmidt said in a video posted to Twitter on Saturday morning. “The collision was absolutely catastrophic. It was devastating. The driver was killed on impact and there was only the driver in the vehicle at the time.”

Schmidt said that police received reports that the vehicle may have been travelling in the wrong direction on Highway 403 through the City of Mississauga.

He said that police have spoken to several people who dialed 911 to report the incident but want to speak with any other driver who may have seen the events leading up to the collision.

He said that police will consider all possible contributing factors, including potential driver impairment. “If you have dash cam video or any other evidence that will help us provide some answers as to where the vehicle came on and what the situation was please call Port Credit OPP,” he said.

The deceased driver of the vehicle has been identified as a 29-year-old man from Whitby.