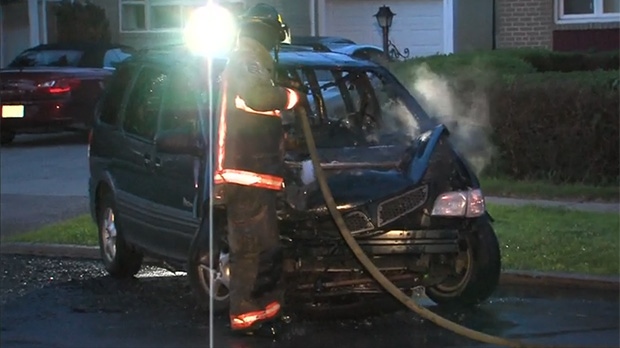 A firefighter hoses down a vehicle that burst into flames after hitting a pole in North York Friday, May 23, 2014.

A 24-year-old man is in uninjured after a minivan he was driving crashed and burst into flames in North York early Friday morning.

The crash happened at around 5 a.m. at Lynedock Crescent and Fenside Drive,near York Mills Road and the Don Valley Parkway.

Firefighters arrived on site and extinguished the blaze.

Police are investigating what caused the van to strike the wooden pole before catching fire.

They said the driver has been taken into custody for a breathalyzer test, and could face charges.

There were no other vehicles involved in the crash.