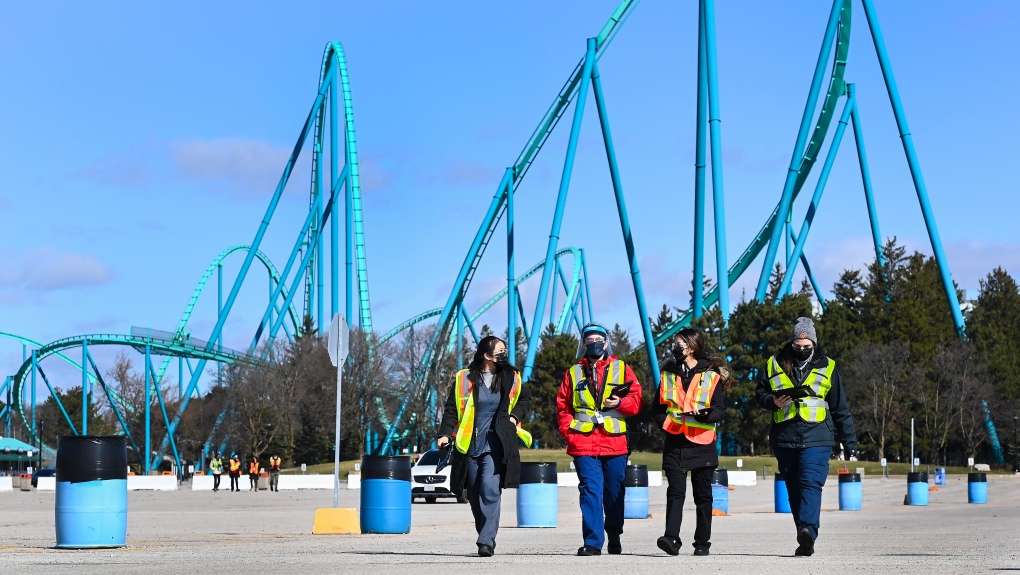 Health-care workers get ready to take patients at a drive-thru COVID-19 mass vaccination site at Canada's Wonderland during the COVID-19 pandemic in Vaughan, Ont., on Monday, March 29, 2021. People don't have to leave their vehicles to get their dose of the vaccine. THE CANADIAN PRESS/Nathan Denette

TORONTO -- York Region is temporarily closing two of its mass immunization clinics again, including the drive-thru site at Canada’s Wonderland, due to the lack of vaccine supply.

Melissa Pinto, a spokesperson for York Region, said in a statement that the clinics at Wonderland and the Georgina Ice Palace will pause vaccinations beginning Tuesday and remain closed until additional vaccines are delivered.

On Friday, Wayne Emmerson, the chairman and chief executive officer of York Region, wrote a letter to Health Minister Christine Elliott requesting more doses to keep the clinics open and avoid reduction of operating hours in other sites.

Emmerson wrote that the region is facing an “imminent and serious” reduction in vaccines due to the Moderna shipment being delayed.

“Due directly to this delay, we are now unable to accommodate many of the newly announced eligibility groups outlined just yesterday by the provincial government, including offering COVID-19 vaccines to residents between the ages of 60-64,” he wrote.

Emmerson said two other physician-led clinics will also be closed, and three vaccine sites will have to reduce their hours of operation as a result.

“York Region is experiencing a surge in COVID-19 cases. Because of this, we are shifting our priorities from not only protecting our most vulnerable individuals but to also address areas in York Region experiencing the highest incident rates, hospitalizations and mortality,” Emmerson wrote.

“Without additional vaccine, we will not expand fully to protect the remaining eight of 13 provincially identified “hot spot” areas, including residents and essential workers such as those working in manufacturing plants and educators.”

In a news release issued Sunday evening, the region said the Ontario government was not able to replenish their supply.

This is the second time that the clinics at Canada’s Wonderland and the Georgina Ice Palace were shut down. The two sites closed earlier this month also due to a lack of vaccine supply.

More than 250,000 doses have been administered in York Region so far.