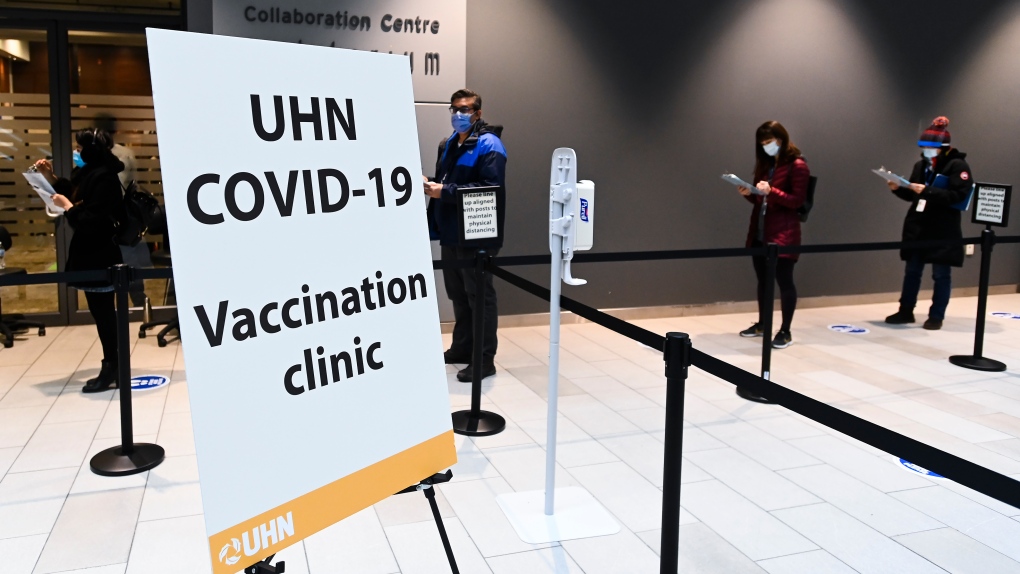 Health-care workers wait in line at a UHN COVID-19 vaccine clinic in Toronto on Thursday, January 7, 2021. THE CANADIAN PRESS/Nathan Denette

TORONTO -- Nearly 200 University Health Network employees are expected to have their employment terminated after failing to comply with an Oct. 22 deadline to become fully vaccinated against COVID-19.

Spokesperson Gillian Howard tells CP24 that as of yesterday approximately 181 UHN employees had failed to provide proof of vaccination and were therefor not compliant with the hospital network's policy, which was first announced back in August.

The news comes just one day after the Hospital for Sick Children placed 147 of its employees on unpaid leaves for failing to comply with a similar vaccine mandate.

The deadline to provide proof of vaccination at several other GTA hospitals, inclining the Trillium Health Network and Unity Health Toronto, has also passed and it is possible that hundreds more workers could be placed on unpaid leaves or terminated at those facilities in the coming days.

“Our mandatory vaccination policy is in place to ensure that we have done as much as we possibly can to protect the health and safety of our patients and our staff,” Howard said in a statement provided to CP24. “UHN cares for some of the most immune-compromised and/or immune-suppressed patients and this is something that virtually all of our patients and staff expect of us.”

UHN began placing unvaccinated employees on unpaid leaves on Oct. 8 and had said that anyone who remained unvaccinated as of Oct. 22 would be terminated.

Howard said that about 98 per cent of the approximately 17,200 employees at UHN did ultimately meet the deadline to become compliant with the policy, including 100 per cent of the physician and research groups.

News of the termination comes as the Ford government continues to mull over implementing a provincewide vaccine mandate for healthcare workers, as it did for those in the long-term care sector earlier this month.

Speaking with reporters last week, Ford said that he had concerns about the impact that a mandate would have on hospital staffing given data suggesting that 15 per cent of Ontario's health system workforce remains unvaccinated.

“Let me be clear: every hospital worker should be vaccinated, we encourage all of them to get vaccinated and the vast majority have. But at a time when our doctors and nurses are already stretched to their limits, especially in northern and rural areas, we can't afford to lose qualified staff,” he said.

Both the Ontario Hospital Association and the Ontario Science Advisory Table have written Ford in recent days to offer their support for a provincewide vaccine mandate for healthcare workers.

According to the OHA, about 70 per cent of hospitals already have more stringent policies than the one implemented by the Ford government, which allows unvaccinated employees to participate in a rapid testing program. ​