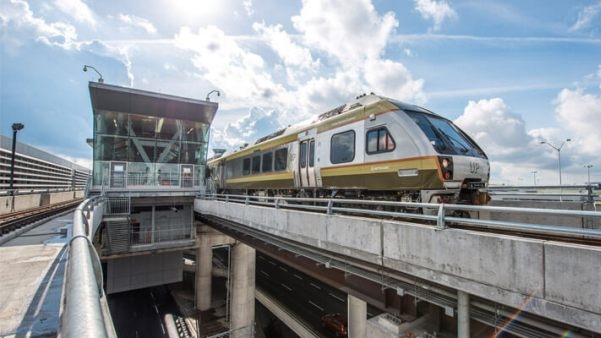 An UP Express train makes its way across an elevated guideway at Pearson Airport. (Metrolinx)

TORONTO -- UP Express customers can now tap-on and pay for their ride using debit cards instead of having to pre-purchase a ticket or load their PRESTO card.

In March, Metrolinx launched a pilot program allowing for contactless payment on UP Express, the rail link that connects Union Station with Toronto Pearson International Airport.

The transit company started the pilot project with allowing customers to tap their physical credit card or the credit card in their mobile wallet to pay for their fare.

On Thursday, the transit agency said customers will also be able to tap on and off using their Interac Debit, Visa Debit and Debit Mastercard, or by adding these cards to their mobile wallet and tapping with their phone or smart watch.

“This not only means more choice and convenience for UP Express customers, it also makes us the first transit agency in Canada to offer a Canadian contactless debit option as a way to pay,” spokesperson Nitish Bissonauth said.

“These new payment options are all about giving our customers more choice. Customers will have the freedom to choose how they’d like to pay – whether that’s with their PRESTO card or with one of these new options we’re introducing.”

Customers can continue to use their Visa, Mastercard or American Express credit cards (physical or digital version in their mobile wallet) to pay, as well as more traditional options like a PRESTO card and e-tickets.

The transit agency said that for both credit and debit card use, customers will still need to tap on and off in the same way as when they use a PRESTO card.

“Before you go tapping away, it’s worth mentioning that when a customer taps a debit card at the beginning of a trip, a temporary $15 pre-authorization may be placed on that card, even if the actual fare is less.”

Metrolinx said this amount may be held by a bank until PRESTO calculates the actual fare for the trip and charges the customer’s bank account, and that final charges should typically appear within 24 hours.

The company said it plans to be rolling out its credit, debit, and mobile wallets payment program to “more transit agencies across the region.”