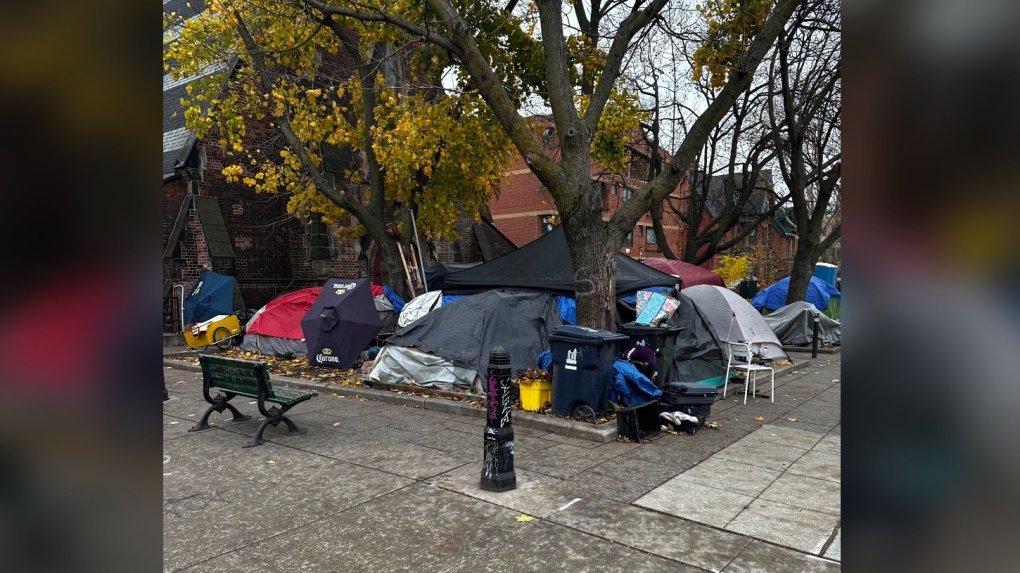 About six months ago, an encampment sprung up outside the Church of St. Stephen-in-the-Fields in downtown Toronto. On Nov. 14, the city served its occupants with a 14-day notice of trespass enforcement. (Dr. Andrew Baback Boozary photo)

People living in an encampment outside Saint Stephen-In-The-Fields Church have been given notice by the City of Toronto to pack up and leave, even though the tents were pitched in the yard with the church’s blessing.

“I don’t know why they’re doing this,” said Reverend Maggie Helwig. “People have been here for over six months. We have not had any serious problems. It just seems unnecessarily cruel.”

According to the notice of violation, the occupants of the encampment near Kensington Market are dwelling in and obstructing the street, despite being in the churchyard.

Rev. Helwig says it was believed this was church land, but the City of Toronto advised them that, according to its archives, the land is in fact a transportation right of way and public property.

“It is morally and ethically the churchyard,” Rev. Helwig said, adding for as long as she has been leading the church, there has been at least one person sleeping and seeking refuge there every night.

What changed was that about six months ago there was a proliferation of tents. The number of people staying there fluctuates on a given day. According to the city, at last count there were 11 tents and four full-time occupants.

Not everyone is sleeping on public land. There are a few occupants nestled beside the wall. Rev. Helwig says it’s unclear if they and their belongings will be removed as well, but they are implicated in a second notice sent by the city on Wednesday.

A spokesperson for the City of Toronto says the encampment “is located in a City right of way and on private property.”

“Many of the occupants of the tents located on site have voluntarily engaged with outreach staff and have been provided with offers of service and indoor accommodations,” they said in a statement to CTV News Toronto.

“The City cannot force people to come inside and avail themselves of the many services offered by the City, but living in an encampment in a City park is unhealthy and illegal,” the statement continued.

“Occupants of the encampment on the City right-of-way in front of the Church were provided with 14 days notice of trespass enforcement on November 24. The City reserves the right to enforce the notice any time after the 14 day period.”

“We have supported helping thousands to come safely inside, and thousands more to move from the shelter system into more stable, long-term housing,” said Deasley, adding there have been 55 people moved into safe indoor shelter in the last week.

“The Mayor continues to support the work underway to build more deeply affordable and supportive housing to provide people with supports and a pathway out of homelessness,” Deasley said.

Rev. Helwig says in some cases, occupants of the encampment have been advised there is place in respite services, but there is no guarantee of accommodation night to night, and they would have to part with their tents and much of their belongings.

A second notice from the city was delivered to the church on Nov. 30, saying debris and belongings that are not tents are a bylaw infraction and must be removed by next Monday, or they will be cleared at the church’s expense.

The church has a long history of outreach and support, and is “known as a place that doesn’t turn people away,” Rev. Helwig said. It was one of only a handful of organizations that never halted its drop-in programs during the pandemic.

When CTV News Toronto first visited the encampment in October, a man who identified himself as Danny said he was afraid to seek refuge in a shelter for his own safety.

Danny said he had lost his job and his home living in Wasaga Beach, and came to Toronto to be closer to available resources to help him stay on his feet.

“We try to be good neighbours,” he said, adding he routinely cleans the outskirts of the encampment of debris, or used needles he says are left nearby by other people who don’t live in the encampment—something Danny says is especially troubling to him, with a daycare down the street.

The encampment residents have been given a deadline of Dec. 8 to leave. Rev. Helwig says only one—a woman who has cancer and is receiving treatment in her tent—has potential to find housing by that date through Streets To Homes.

Members of the church and allies are planning a demonstration beside the encampment for Dec. 8.

The Anglican Bishop of Toronto Andrew Asbil is expected to attend, as well as artist Timothy Schmalz, celebrated for the series of statues entitled Homeless Jesus, the first of which was displayed in Toronto but have since been placed around the world including outside Saint Peter’s Basilica.

Helwig says he will be constructing a cage to surround the panhandling messiah, which sits outside the church, until the city “stops criminalizing homelessness.”